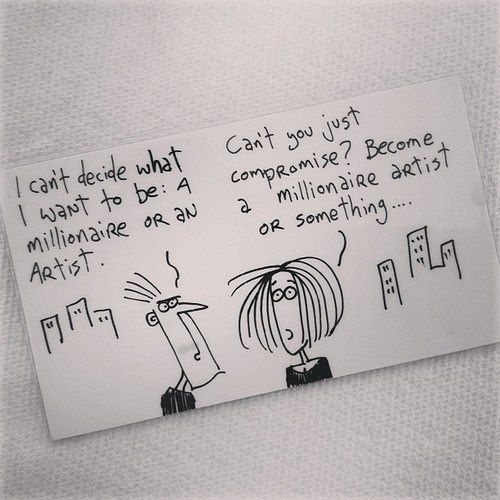 SOME EXISTENTIAL THOUGHTS ON EMPLOYEE ENGAGEMENT:

My personal mission: “To make people hate their jobs less.”

My company’s mission: “To increase the engagement of our clients’ employees.”

“How do I hate my job less” is not the same question as “How do I get my people to hate their jobs less.”

The former is quite easy and straightforward (at least on paper), the latter is really quite difficult and complex.

But they’re both worth knowing about. According to Gallup, 70% of Americans are disengaged from their jobs, costing the US economy hundreds of billions of dollars a year. So even if my company’s work only makes a small dent in the grand scheme of things, we can still create a lot of value in the here and now.

In my early twenties I had some terrible work experiences, holding down crappy jobs that I hated.

I never was that ambitious, I never particularly wanted to be rich per se- I was always the daydreamy type, I never thought I had the hardcore “On It” personality one needed to be a successful entrepreneur or executive. I just thought that hey, if I could find work I liked well enough and feed my family in the process, that would be success enough. But these crappy twenty-something jobs taught me a painful lesson about JUST how hard it was to be even moderately content if your job sucked.

We can’t all be rock stars of billionaires. But how do we make work less of a crappy situation for as many people as possible? What needs to happen?

It’s still a question that drives me, at the very core of my being.

Everybody knows how critical a shared sense of mission is to a team’s fortunes. Napoleon and Julius Caesar certainly knew it, and they …

SOME EXISTENTIAL THOUGHTS ON EMPLOYEE ENGAGEMENT: My personal mission: “To make people hate their jobs less.” My company’s mission: “To increase the engagement of …

The rumors are true, the team is heading up to Orlando for a big HR event. Official Blurb: Gapingvoid will be at SHRM: 2014 Orlando from June 22nd-25th this …