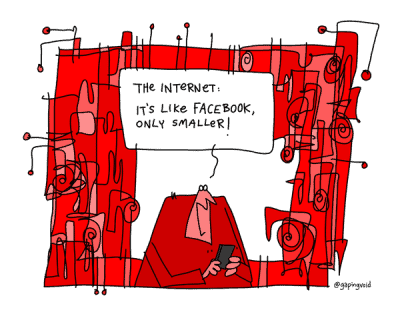 [Content marketing: One of the @Rackspace cartoons I drew recently for Robert Scoble’s weekly newsletter.]

A decade ago, my buddy Tom Foremski quit his high-status job in journalism as the tech correspondent for the London Financial Times, to go become one of the first professional tech bloggers out there. Back then there was no Techcrunch or Re-Code, there was no proven business model, it was just him and his laptop. It was a very brave, pioneering move for the time.

Around the same time, I was doing a little bit of pioneering myself, being one of the earliest content marketers to use the blog format. Back then I called it “Blogvertising”- a horrible word, I know.

It was all virgin territory back then, but the idea that one could use blogs for “brand storytelling” was an exciting idea to me. Imagine moving the needle for a big client with nothing more than a laptop and an Internet connection. No fancy offices or ad agency needed. So I went for it.

The rest is history. With the help of gapingvoid and my business partner, my co-founder Jason Korman, I ended up doing very well by it, as did a few of my friends in the same space. They were fun times, those early days.

Brand storytelling (brand journalism, earned media, content marketing, or what ever name you call it) is now a big deal. Big enough to where even Foremski, one of the better tech journalists out there, has now decided to try his hand at it, having just joined Delphix, a hot Menlo Park startup, in a senior editorial role.

So what is it that makes respected journalists move over to the other side?

Well, there’s money, of course. Businesses are better known for making money than are newsrooms. The traditional journalist business model isn’t getting better with age, that’s for sure.

And I though can’t speak for Tom (or Dan “Fake Steve Jobs” Lyons, who made a similar move when he went over to Hubspot for a while), I suspect after years of watching everyone else having an exciting time in the business world, you maybe want a piece of the action yourself. You, too want to be directly involved somehow, not just commentating from the newspaper sidelines. I can totally see that.

The other reason is, simply, it’s still a really exciting business opportunity.

Though there’s a lot of brand storytelling out there already, the fact is, most of it isn’t very good. Most of it is little more than standard corporate comms, cut n’ pasted onto a website. Most of it is drivel, as any reader of The Ad Contrarian will tell you.

Sure, some of the big ad agencies and PR firms do nice work on occasion, but it’s still hard and messy and expensive, for the most part.

The people who know how to do it properly with real flair, say, Microsoft’s Steve Clayton, Rackspace’s Robert Scoble or Copyblogger’s Brian Clark are still very thin on the ground, even a decade later.

So if you’re one of the few who has a real talent for it, trust me, the business world needs you. Go for it.

ONE. Great content marketing is like great advertising: it’s utterly impossible without a great client supporting you.

A bad client will want the same ol’ crap, force you into a failure position, then throw you under a bus soon after.

Great clients are the same as great work. They have to be fought hard for.

TWO.  Journalists acting like brand guys. Brand guys acting like journalists. If it seems blurry, that’s because it is. As with all things Internet, everything is evolving faster than anyone can possibly keep up with. The only option is to jump in head first and start swimming. But that’s what keep it interesting.

Good luck in your new adventure, Tom, I’m sure you’ll be amazing at it!

[Hugh MacLeod is a cartoonist and co-founder of gapingvoid, a company specializing in creating art to affect real business outcomes and corporate culture for companies like Microsoft and Zappos. He tweets at mostly at @hughcartoons, sometimes at @gapingvoid.]