This happens far too often. The C-Suite loses touch with the people on the ground, too busy hobnobbing with the fancy folk etc.

And the thing you notice the most about the corporate bubble? How small it is. Not an expansive existence, nope. Not even a little bit.

It happens to the best of us. Life is complicated.

Thing is, once you recognize it, it’s fairly easy to fix. After all, bubbles can be popped… 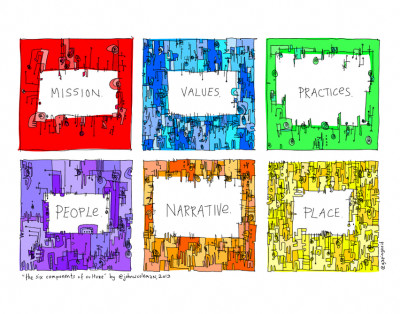 Corporate Culture is a big deal here at Gapingvoid- it’s basically what we do for a living.

So in 2013, when I came across this Harvard Business Review blog post by John Coleman, “Six Components Of A Great Corporate Culture”, I knew it had to be a drawing.

Of course, corporate culture as a competitive advantage is nothing new. Julius Caesar knew that a motivated platoon was worth five times as much as an unmotivated one.

Which is why no General in history worked harder to make sure that his troops not only loved and respected him, but believed in his mission, as well.

Pity he couldn’t transfer this talent to the Roman Senate, he may have escaped being assassinated… 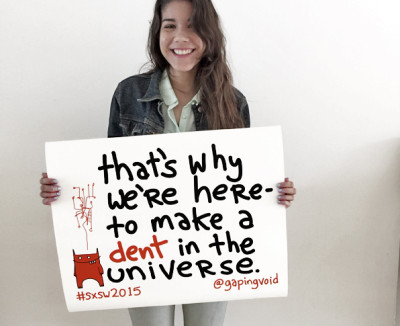 This image is currently spreading all over Austin at SXSW 2015.

It’s one of our original favorites, and we’re making a limited edition of only 100 available for SXSW for Gapingvoid fans.

We’ve been having so much fun this week at SXSW 2015 Interactive. This cartoon was inspired during a live drawing session from Eric Ries’ talk Everything Eric Ries Has Learned Since 2011.

Eric is using it in his latest Kickstarter campaign.

This was a cartoon from an engineering series I drew for @interrante when he was at Rackspace. Rackspace hires a ton of engineers, so we wanted to do something for them.

The thing about engineers is, they really love being engineers. So much so, that they can’t imagine being anything else.

The fact that there are people out there who don’t want to be engineers is almost alien to them.

You gotta admire that passion and commitment…

“Do you really ever want to look at your spouse and your kid and see your jailers?”

Thanks to reader Adam Lemmon for the awesome tip: Larry Smith’s TEDx talk on following your passion puts into words the idea I’d started to get into re: parenting and career.

Yes, raising a family and having a career makes both pursuits more difficult, and yes, there will be compromises – nobody is perfect.

But at what point do we start using family as a convenient excuse, a socially acceptable way to cover our own fears?

Most importantly: are we taking away our kids’ chance to dream big, when we set the wrong example?

If you watch one video this week – make it this one.

Want these cartoons delivered to your inbox? Subscribe to the Weekly Digest.