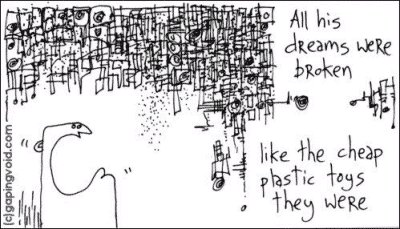 [Shortly after my career tanked in 2000, I drew this cartoon. This is what failure felt like at the time.]

1. Anyone with a successful business will know this to be true: That business gets successful eventually, not by some flawlessly-executed grand vision, but by a lot of trial and error (mostly error) over a long period of time.

And the more things you’re willing to try, the greater the chances you have of hitting the bullseye. “Will it work? No idea, probably not, but let’s try it anyway…”

If failure is not an option, then it’s not really an experiment, is it?

This is what businesses forget far too often, especially in marketing. They insist everything has to be successful in advance.

Which is a recipe for exactly the wrong kind of failure, of course.

2. While we’re on the subject of failure, my long-time blogging buddy (and one of the smartest journalists I know), Bloomberg columnist Megan McArdle has a new book out, “The Up Side of Down: Why Failing Well Is the Key to Success”.

The book’s main thesis is about the USA and its relationship with failure:

McArdle argues that America is unique in its willingness to let people and companies fail, but also in its determination to let them pick up after the fall.

Megan is terrific, super-lucid writer, I hope you’ll check it out.

3. “SUCCESS IS JUST ANOTHER WORD FOR MANAGED FAILURE”. I like that thought. It’s certainly been my experience. It also fits in nicely with just about my all-time favorite book about how the real world works, Nassim Taleb’s “Antifragile”.

4. “The best laid schemes of mice and men, often go awry.” Robbie Burns knew what he was talking about.