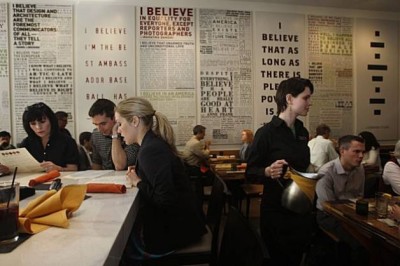 [Photo courtesy of the SF Gate]

When I was in San Francisco last month, I really liked the vibe I got from Credo, pretty much the most graphically-ambitious restaurant I’ve ever been in. Man, that typography was EVERYWHERE. From the SF Gate:

Credo, which means “I believe” in Italian, is a restaurant that advocates a strong belief system. To that end, the walls are lined with hundreds of quotations, from Pablo Picasso’s feelings about communism to Eminem’s thoughts on racism. It may seem like an obscure theme, but here’s the explanation on the menu: “Our walls depict the universality of ideas, the clash of conflicting viewpoints and the democratic nature of discussion and debate.”

Fair enough, especially when you consider how fond San Franciscans are of beginning sentences with the words, “I believe”. And the strong Jenny Holzer and Christopher Wool artistic influences help give it that whole graphic, downtown urbane thing, as well. And yes, the food is quite good, it’s a hip crowd, the staff know what they’re doing, the place is happening. A definite win, all in all.

The truth is, like its close cousin, Office Art, not all Restaurant Art is bad. Mark Rothko’s Seagram’s murals started life out that way, and they are considered major masterpieces. Like Office Art, it all depends on how and why it was made. It all depends on how the story plays out, long after the initial opinion formers are forgotten.

I expect ambitious restaurant art like Credo’s to become an increasingly important part of the mix over time… both as a way for the restaurant to differentiate itself from other restaurants, of course, but also as a good way for the restaurant to compete with their customers’ phones for those increasingly-precious attention dollars. People need to look at something while they’re waiting for their food… you’re no longer just competing with that sushi place round the corner for external stimuli, you’re now also competing with text messages and Facebook. Welcome to the future etc.