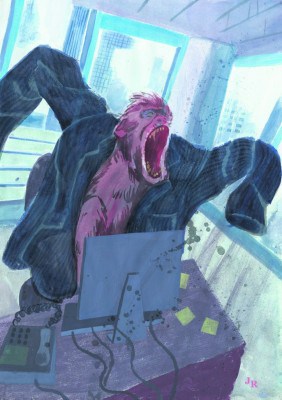 I came across this powerful illustration by John Riordon, in a blog post that’s gotten a lot of attention in left-wing circles, “On The Phenomenon Of Bullshit Jobs”.

The article is a fairly typical rant from the British alternative press, written by an American anthropology professor from the London School of Economics (the fellow was also deeply involved with the Occupy movement, it seems). Nothing we haven’t seen before.

Yes, the world has changed. Deal with it.

THIS is why CEOs are suddenly paying so much attention the “Culture” meme, why so many execs visit Las Vegas every year to take the Zappos Culture Tour.

This stuff is a big deal, this stuff is where the competitive edge will be in the 21st Century.

Sure, the bullshit jobs will still exist, as will the legions of unhappy workers filling them. But that’s not where the future lives, that’s where the dinosaurs live.

Hopefully you’re smart enough to avoid the latter. Like I said, the world has changed. Deal with it.

[Bonus Link:] Stowe Boyd’s “Deep business culture eats shallow corporate culture”. With jobs-for-life being a thing of the past, corporate cultures need to be more porous and open. Food for thought etc.