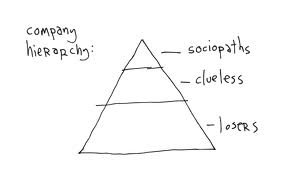 I know I’m a bit late to the party, but a few people have asked me what I think about the recent headline-grabbing Omnicom-Publicis merger, which if it goes ahead, will create the largest advertising conglomerate in the history of the world.

Not much, to be honest. It’s just a continuation of the decades-old trend in advertising networks getting larger and larger. I remember it all starting back in the 1980’s, when the Saatchi Brothers started buying up everything in sight, then WPP buying Ogilvy & Mather…

Even my ferociously independent alma mater, Leo Burnett was gobbled up by Publicis eventually.

This is basically the same animal, on a grander scale.

Other than the CEO’s needing their salaries raised and the usual global-economies of scale, I’m frankly not sure what problem the merger was actually trying to solve.

I’m guessing there really isn’t one. I’m certain for their Creative Departments, it’ll just mean more of this:

Or as the bean counters upstairs quickly realized, we could just do three times as many jobs in the same amount of time, and make them three times as much money. For the same reason that Jumbo Jets don’t have the grand pianos and palm-court cocktail bars we were originally promised in the brochures, the accountants naturally won the day.

i.e. The usual commidification of eveything that is unique about the industry.

Though I can understand how the merger will allow the agencies get better data and save on overheads, I’m not sure how all this will make them create better work.

So why should Madison Avenue be any different…?

And the people who truly know how to do that are very thin on the ground, same as always.

So there is STILL a ton of opportunity out there, for anyone with the balls to go after it, inside OmniPub or somewhere else.

I guess it all depends why you’re in the ad game, to begin with…

[Disclosure:  A client of gapingvoid, Havas Worldwide is a direct competitor of both Publicis and Omnicom.]

[Bonus Link: Check out my latest e-book, “Authenticity Is The New Bullshit”.]