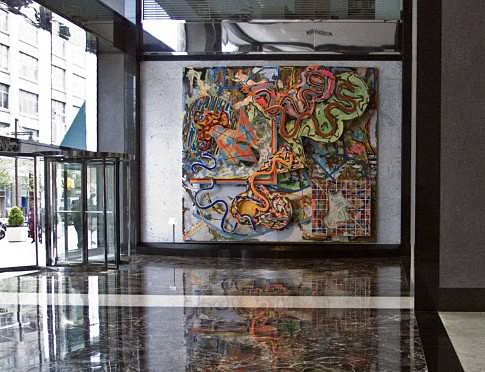 [photo courtesy of artnerd. the frank stella piece in the photo above was taken inside the saatchi & saatchi building, up in new york city.]

Walk into the lobby of any high-profile, modern corporate office building, and there’s a good chance you’ll see a Frank Stella painting, hanging on the wall. His stuff is pretty ubiquitous.

There’s rarely anything much happening in Stella’s paintings, conceptually or emotionally. But then again, that’s the point. As Stella famously quipped, “What you see is what you see”.

I like Stella’s work, at least the early black paintings. They had this clever, Minimalist austerity about them; a reaction to both Pop or Abstract Expressionist, the dominant styles of the era. A cool, hard-edge, understated reaction to the tumultuous 1960s zeitgeist. And it worked.

Though a half-century of cultural assimilation (and lots of color) later, his work now seems about as subversive as a stack of colored photocopier paper.

For all the endless volumes of highbrow art-blether afforded it over the years, the work just basically sits quietly in the background, looking pretty, doing as little as possible.

Hang out in most offices or any boutique hotel lobby, and you’ll see a lot of other artists’ work, doing the same sort of thing. Bright, hip, colorful, yet all somewhat inert. Mustn’t rock the boat here, we’ve got back-to-back meetings, emails to send, *out-of-the-box ideation* sessions to co-ordinate; we can’t have anything interrupting our performance, No Siree.

Stella’s stuff sells for millions, yet it has no meaning, no purpose. Expensive, coveted, yet giving nothing away, like a Manhattan socialite.

Given how much his work and corporate lobbies seem to like each other, you could call Stella the grandaddy of office art; he certainly is a contender.

I think we can all do better than that; gapingvoid is certainly trying…

This is one of the pieces we did recently for the Miami Beach Mayor’s Office. Though Miami Beach is mostly known as a tourist town …

[Buy the print here etc.] I gave this print to my wife, back when we first got engaged. It hangs in our living room, a …