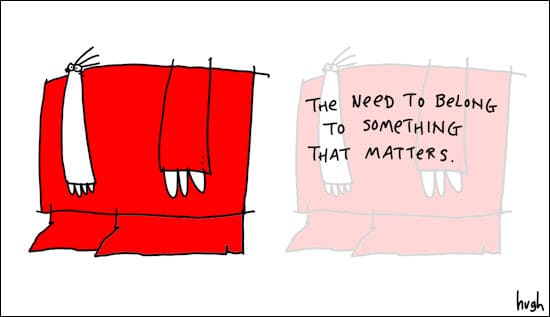 1. The mar­ket for something to believe in is infi­nite. We are here to find mea­ning. We are here to help other peo­ple do the same. Everything else is secon­dary. We humans want to believe in our own spe­cies. And we want peo­ple, com­pa­nies and pro­ducts in our lives that make it easier to do so. That is human nature.

6. The future of adver­ti­sing is inter­nal. The har­dest part of a CEO’s job is sha­ring his enthu­siasm with his collea­gues, espe­cially when a lot of them are making one-fiftieth of what he is. Selling the com­pany to the gene­ral public is a piece of cake com­pa­red to selling it to the actual peo­ple who work for it.

7. Your job is no lon­ger about selling. Your job is about firing off as many synap­ses in your customer’s brain as pos­si­ble. The more synap­ses that are fired off, the more dopa­mi­nes are relea­sed. Dopa­mi­nes are seriously addic­tive. The more dopa­mi­nes you release, the more the cus­to­mer will come back for more. Your cus­to­mer thinks he is coming back to you for sane, ratio­nal, value-driven rea­sons. He is wrong. He is coming back to feed.