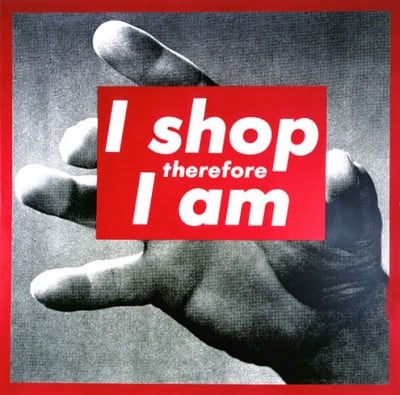 Back in my young, early, I got really interested in the work of Barbara Kruger (she uses words and pictures, so it makes sense, right?).

I hadn’t discovered her work through an art gallery, book or magazine etc.

I discovered her stuff because Christian S., a friend of mine at work had hung a Barbara Kruger postcard (published by Fotofolio) on his cubicle wall. I thought it was terrific.

But more than that, it gave me this sudden moment of insight:

The way I saw it then was, Christian had put the postcard up on his cube wall not just because he wanted his cube to be pretty. Christian didn’t really decorate his office, it was very Spartan and minimal, the postcard was THE ONLY piece of decoration he had.

Back then, Barbera Kuger’s art was considered pretty cool, hip, not to mention, angry.

Christian was also kinda cool and hip, and also kinda angry as well. And he didn’t seem to mind other people knowing it, either.

In other words, this art was being used by Christian to “signal”. Signalling. “I’m cool, I’m hip, I’m angry, don’t you forget it” etc.

Signalling in the work place, exactly.

Back then I lived in pre-gentrified Wicker Park, the trendy bohemian Chicago neighborhood. I knew a lot of artists personally, a lot of them doing insanely great work, some of them even became famous- Chris Ware, Dan Clowes, Dzine etc.

What’s curious to me looking back is, of all the artists I knew then, I was the only geeking out about how art worked specifically in the office, as opposed to the home, gallery, museum, magazines and newspapers, TV, etc. etc.

It was a big obession of mine.

Why the obesession with offices? Because they’re important. It’s where we spend a HUGE chunk of our lives, every day. And if you’re the workaholic that I was back in 1990, the office is pretty much your real home, the place where you sleep and eat and watch TV becomes your second home. So art in the office becomes EVEN MORE imporatant.

The office is also where homo sapiens do a major proportion of our signalling, just like our buddy Christian was doing.

, Jason and I have taken that obsession and built a business around it: we help create “signalling” for our clients, as it were. This may all seem pretty obvious to gapingvoid fans now, but back then it would’ve seemed like  a pretty strange idea to most people. Heck, even nowadays it’s still pretty “out there”.

But I’m okay with “out there”.

The less “out there” ideas tend not to work nearly so well, and even when they do, they are generally MUCH more expensive (e.g. corporate TV campaigns).

Just as the Internet blurred the work/life divide, I believe the Internet is also blurring the art/business divide.

And gapingvoid is at the very epicenter of it all, gapingvoid has a front-row seat. , the pot is finally beginning to boil. Very cool.