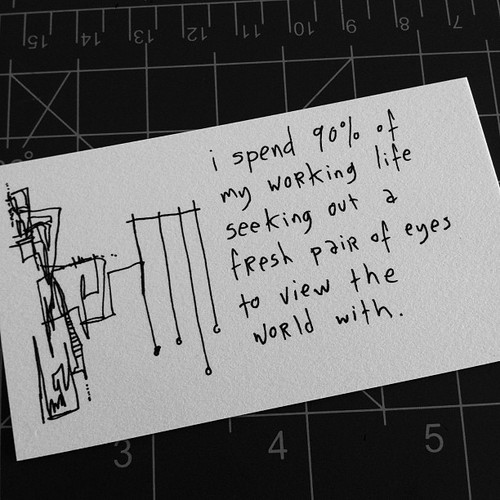 [Just added the following to “The Art Of Not Sucking” etc.]

Long before I acqui­red even the fain­test inte­rest in modern art, I was down visi­ting my dad in Hous­ton, han­ging out with a college buddy, Andrew. We were both about twenty at the time.

Loo­king for something to do, Andrew sug­ges­ted we should go see the Rothko Cha­pel, and so we did. I had never heard of either Rothko or the cha­pel before.

When we got there, all I saw were these big, dark, blank can­va­ses, not unlike the mono­lith in Kubrick’s “2001”.

I didn’t get it, frankly… I wal­ked out, unim­pres­sed. Some big, black rec­tan­gles. Any half decent house pain­ter could’ve made those. So what?

But the visit sta­yed with me, somehow. For rea­sons I couldn’t explain, for weeks after­wards I couldn’t get the Rothko’s out of my head. The pain­tings struck a nerve, one that I didn’t even know I had.

Nearly three deca­des later, I think I now know why. By pain­ting these big, black mons­ter pain­tings, Rothko was trying to get the vie­wer to “gape into the void”. He wan­ted us to con­tem­plate “The Mys­tery”, the awe­so­me­ness (good or bad) that is Crea­tion, that is the Divine, that is the Universe.

Deca­des later, I rea­lize that all art– the good stuff, any­way– is trying to get us to do the same thing: Unders­tand the immen­sity of exis­tence, wha­te­ver that might mean.

Do you have to be reli­gious to do that? Of course not. No mat­ter what you believe, call it either God or The Void or the Phy­si­cal Uni­verse or something else alto­gether, the immen­sity is still there. What Wer­ner Her­zog calls the “Ecs­tas­tic Truth” is still there.

And it’ll always be a mys­tery; your exis­tence in it will also remain a mys­tery, no mat­ter what the cle­ver folk in the TED videos may tell you.

So I wrote that line down, “All Art Is Reli­gious Art”.

All art is trying to be a con­duit… of Ecs­ta­tic Truth.

You don’t have to agree with me, but the older I get, the more I believe it myself, the more I want to live like it IS true.

And maybe it applies to stuff other than “Art”? Like maybe some of the stuff you do, to make a living, perhaps?

Maybe what you do for a living is more mea­ning­ful than it sounds.

[The Art Of Not Sucking is a work in progress, a brain-dump of sorts; it is by no means finished,  BY NO MEANS definitive… More later.]