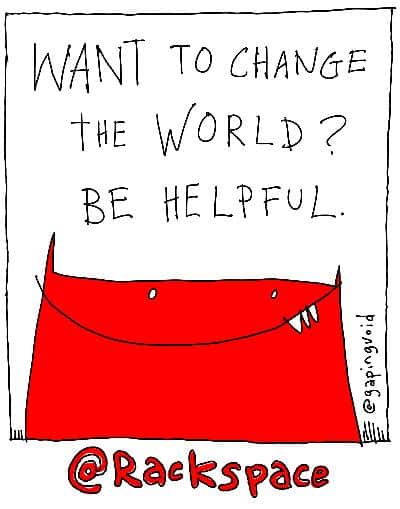 [More thoughts on The Rackspace Book…]

Rob La Gesse is the groovy cat who first hired gapingvoid at Rackspace.

He’s also the guy who hired my friend, Robert Scoble.

He’s a lot like me and Scoble, i.e. very much his own man, very much an individual.

I suppose that’s why we get along.

Above is a T-shirt design I’ve never shown Rob before- he’s seeing it for the first time here on the blog, the same as you and everyone else. He may like it, he may not.

That’s how Rob and I work together. Like I said in my last blog post, “he lets me just post stuff without get­ting pre-approval. We like doing that way because it lets him see the work for the first time in the wild, which keeps the thin­king fresher, somehow.…”

The thing is, there’s a method to the madness. If the idea fails, hey, it’s just a wee cartoon on a blog post. We can quickly and easily try something else the same day. It’s not like we blew money on a Superbowl ad that ended up bombing…

But if the idea works, it works REALLY well. The idea gets emailed around, both inside and outside the company, to employees, shareholders, customers, and non-customers alike. It suddenly takes on a life of its own, on its own merit.

In other words, it suddenly becomes a cultural object (i.e. a social object that articulates the company culture), as opposed to just a usual piece of commercial, “Here’s-why-you-should-give-us-your-money” messaging (You know, the kind that nobody actually cares about).

Rob and I never planned it this way, we just started talking and this is kinda how it evolved. That’s kinda how we both roll. Rock on.