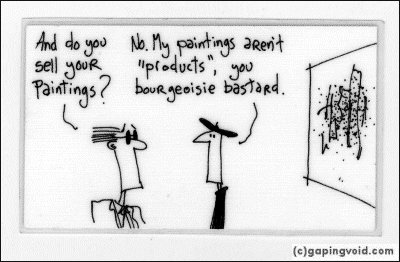 It always excites me to see someone trying to shake up the art industry, so I was sad to learn about Jen Bekman’s fine art retail site, “20×200” suspending operations. Though I didn’t know the people personally, I’d been rooting for them. It seemed like a neat idea, and I loved the name.

So why did it fail? In retrospect, it isn’t too hard to see why: High overheads (Since when did you need a fancy office in SoHo, New York to sell art prints online?). Investors vs Founder conflicts. Beaucoup Employees, Pas Beaucoup sales. Nothing that any of us haven’t seen before…

But here’s another thought:

20×200’s official tagline was “Art For Everyone”. Or to put it through a Marxist lens, art for the masses.

“Bringing Art To The Masses” is a well-meaning idea, sure, but hardly a new one. The early Soviets tried the same thing, coincidentally, around the same time they also discovered that ruthlessly exterminating people en masse (no pun intended) was good for business.

John Ruskin, William Blake, Durer, La Trec, Hogarth, etc etc were trying even before that [Though Ashille Gorky, one of my favorite artists, didn’t like the idea so much. He famously called 1930’s Social Realism  “Poor art for poor people”, but I digress…]

The thing is, like Seth Godin says, does anybody really belong to “The Masses” anymore? We’re all weird, we’re all niche, and thanks to the Internet, we’re all getting weirder and nichier by the day.

In other words, “Art For Everyone” is a nice enough thought, until you realize that few potential customers actually like being put in the “Everyone” basket.

So what basket do people like being put in? A basket with a strong, passionate, relatively unique sense of PURPOSE that defines it. A niche that matters.

And yes, you guessed it, what is true for the online art sales market is also probably true for your industry as well.

It’s either that, or get crushed by Amazon…

[UPDATE:] Jen just sent me a nice email- Operations are suspended, not ceased. So it seems there’s going to be a second act, they’re going to regroup… Stay tuned. Hurrah! 🙂