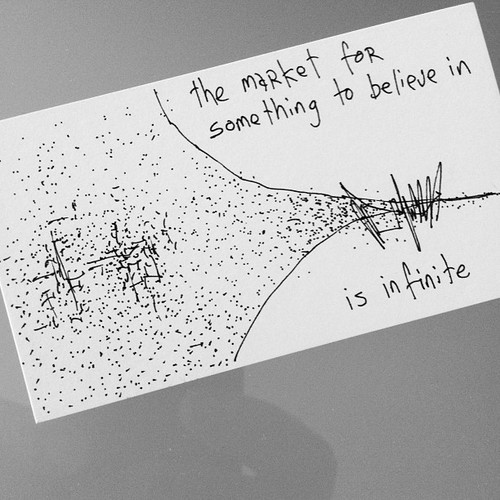 I’ve been seeing a pattern emerging. Here are some of the main ingredients:

1. That Marfa, Texas, one of the great Minimalist shrines in America is now a popular hipster destination spot.

2. One of my my favorite movies of recent years, Jiro Dreams of Sushi, which I’ve been raving about for months, is a big hit in the documentary world. It’s also a filmic love poem to Minimalism (Hey, the director used Philip Glass and Max Richter for the film score, I rest my case).

3. Blogs about simple living and Minimalism seem to be really trendy these days, minimalist bloggers like Zen Habits conquering the world.

4. “The Minimalist” is one of the most popular themes on Tumblr.

6. The other thing I’ve noticed is “Personal Coaches” and “Motivational Speakers” seem to be everywhere. Whether we’re talking Anthony Robbins or Brendon Burchard… or the new job title out there, “speakerauthor” (People known mostly for writing books, but make most of their money doing public speaking: Tom Peters, Malcolm Gladwell etc.) Then you also need all the more technocratic, businessspeak consultant mandarin types out there as well… Like I said, they’re everywhere, it seems to be an increasingly booming industry.

8. The growing idea that the Internet is now a religion.

9. The growing idea that “Jedi” is now a religion.

10. The growing idea that Apple is a religion.

What does this tell me?

That we’re looking for new stuff to believe in.

That though the world is getting more and more complex, the old answers (Do what you’re told, buy a lot of stuff, obsess about THESE celebrities, worship THESE gods/THIS God, watch this trashy Reality TV, watch these crappy movies, read these crappy bestsellers, listen to this crappy music, believe these politicians etc.) aren’t working for us as well as they used to.

Just like the “Hughtrain” cartoon above implies, we have an infinite need for it.

Sure, we like our old certainties (Mom’s cooking, a favorite pair of old jeans, small-town folksy ways, old school good manners, Ronald Reagan, old Jimmy Stewart movies at Christmas time etc), we are genetically programmed to seek out not only the new, but the NEW CERTAINTIES.

So I guess the next the question is, what “New Certainties” is your work bringing to the world?

If you don’t know, maybe best to find out… it’s where the real fun and action is to be found these days.

[When companies get too successful to fast, this often happens…] Does this ever happen to you? A person that you’ve known forever, maybe since you …

Part technology, part people, part change, “the future of business” is different than we think. The Future of Business is also the big idea behind …