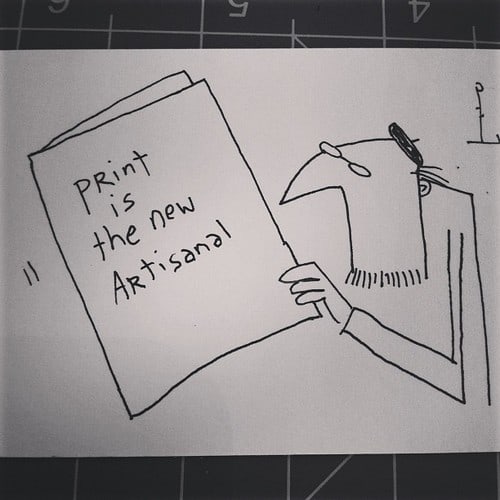 And the blogosphere rings out with with the usual “What will become of print” questions, yada, yada, yada.

I know exactly what’s going to happen to print; the same thing that happened to horses once the automobile came along.

Automobiles may have ended the horse n’ buggy era, but hey, according to my friend, Kathy Sierra, horses are still a FORTY* billion dollar industry in the United States.

I buy most of my books on Kindle. But I buy hardback editions when the book when it has real totemic power for me. Like “Decline and Fall of The Roman Empire”. Or “Tribes”. Or “Moby Dick”.

Or I buy them when they’re simply not made for Kindle, like the artist, Chris Wool’s beast of a coffee table book. Magnificent!

Or I buy the print version of The Economist when I’m getting on an airplane. Keeps me busy when the captain makes me turn my Kindle off during take off and landing.

As far as mainstream journalism and journalists, well, my blogging buddy Mathew Ingram moved over from writing for the Toronto Globe & Mail to writing for the much leaner Giga Om. His move is just one example of what already happening to thousands. Or if it isn’t, they’re in trouble.

Print just going to increasingly be a little “artisnal” niche; the ones who disagree are old and dying off.

I don’t know why this is even a debate anymore. It’s been happening for years.

So I drew a cartoon about it…

[*Not three billion $, as previously stated]

Only when a thing is made obso­lete can we dis­co­ver if there was some underl­ying value?—?beyond uti­lity?—?that some peo­ple found com­pe­lling enough to keep alive or evolve into something new. The hor­ses bred today for “rec­rea­tion” are dra­ma­ti­cally dif­fe­rent from the workhor­ses of the past, but they are still… horses.

What ELSE is being made obso­lete now that might emerge from the ashes in a new, power­ful form?

I agree :). But you’re off by an order of magnitude on the horses… It is a $40 billion industry in the US — that’s just the “recreational” side. That’s why whenever someone gives the “if I’d ask what people wanted they would have said ‘faster horses'” thing, I go through my mental checklist of just how much people are spending today to have faster (in my case, literally, as I ride my horses on an oval race track) horses.

Only when a thing is made obsolete can we discover if there was some underlying value — beyond utility — that some people found compelling enough to keep alive or evolve into something new. The horses bred today for “recreation” are dramatically different from the workhorses of the past, but they are still… horses.

What ELSE is being made obsolete now that might emerge from the ashes in a new, powerful form?

What ELSE might move from utility to beloved hobby? Most people don’t *need* to travel by boat these days, but look at the recreational boating industry…

(Also, glad for any opening to mention horses in a tech setting, because I keep hoping SOMEONE will decide it’s a market worth looking into… $40billion and in desperate need of tech upgrades. One example: Nike tried for years to make high performance horse shoes, but when they had trouble keeping the shoes on the horse’s feet, they went another way — and made the entire surface the horse works out on a giant “running shoe”. Today, just about the most expensive material you can put in a riding arena is made by Nike. (it’s essentially recycled Nikes, I think). I can think of at least 50 start-ups I wish people would do.)

Totally agree, Kathy. “The death of print” in the book industry made me totally re-calibrate my writing ambition/agenda.

And for the better, too….

By reading this post I see many more avenues to take with print and many other industries!

Sometimes we focus so much on something dying we forget evertyhing has a life cycle and people like me believe in re-incarnation!

I agree, Raul, though it’s amazing to me, as an older guy, what people used to pay for that they no longer do. It’s also amazing to me, to see the jobs that are no longer there because of the Internet.