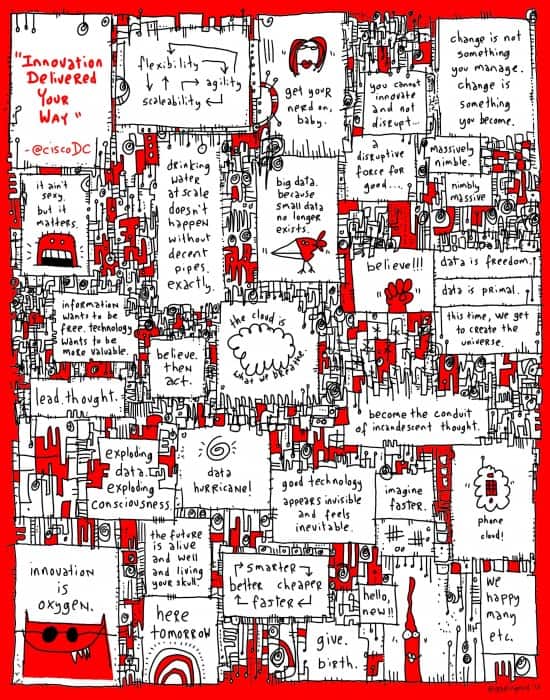 This made me so happy: Instead of YET ANOTHER infographic thingy (Is it just me or are they all starting to look the same?), Cisco commissioned us to produce a cloud-related “gapingvoid All-Over” for their upcoming  #vBrownBag event that they’re sponsoring at VMworld, the big cloud computing conference.

@ciscoDC is a proud sponsor of #vBrownBag this year. Known for their work in the virtualization space, a guide to all things training, we’ve included some great information on their USB key of awesome. The #vBrownBag crew will be out in force, and they’re easily identified. Remember, it’s all about the visuals. Visit the ProfessionalVMware.com blog for complete details on the happenings with their crew. Great information, check it out.

Whether you’re there IRL or enjoying the show from the comforts of wifi, follow @ciscoDC and #ciscovmw for livetweeting from key sessions, updates from roving reporters Josh Atwell andScott Hanson, and whiteboard showdowns from industry leaders as part of Engineers Unplugged (like MTV Unplugged, but with whiteboards and tech rock stars). Like theCiscoDC Facebook page for insider pictures, caption challenges, and more.

Your turn. How do you approach VMworld? Share a link to your blog, whiteboard pic, or video. Tweet @ciscoDC with #ciscovmw as the tag.

As I’ve said more than once before, I’m spending a lot of time thinking about The Cloud and “Big Data”. I think it’s going to be huge; it’s going to change the world; far more so than most people imagine.

Unlike the Internet, the language that describes The Cloud is still very much in embryo stage. The art, ditto.

Yes, the whole thing is nebulous- that’s why it’s called The Cloud. If it weren’t, they’d call it something else.

So that’s what’s driving me in this direction, intellectually. If it interests you as well, maybe it’s best to go check out Amy’s link and go poke around a little. Rock on.

[If you’re in the mar­ket for an “all-over” like this, feel free to con­tact gaping­void CEO Jason Kor­man any­time: jason at gaping­void dot com. Thanks Again…]