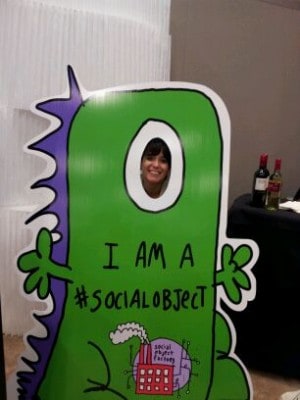 Tim Kitchen has a nice riff on the concept behind the Social Object Factory:

The fourth thing I meant is that there is an ‘aggression’ of conceptualisation. I have written elaborately in the past on memetic branding, along with Mike Cayley and also on brands as producers of connectivity. In Hugh’s mind brands simply become ‘Cannons’ puffing out memetic cannon balls… the visual language removes the need for analytical and captures the essence of the idea. More importantly, it is a productive, energetic and kinetic image, which makes brand owners feel as if they are in control.

Fifthly I was evoking ‘commitment’. Hugh’s basic concept here, as I see it, is to move away from a typical agency focus on the production process, and also to move away from a consultancy focus on outcomes. Instead he confidently assumes the outcomes and trusts his track record for the production process, and focuses instead on the ’stuff’ itself.

Thanks Tim, though I would be remiss if I didn’t mention that the name, “Social Object Factory” was really Jason’s idea (gapingvoid’s CEO).

We were trying to evolve the business away from just “Hugh, the cartoonist” and all that “Personal Brand” crap, to something larger and more interesting, not to mention, scaleable and sustainable.

Besides that, Tim’s commentary is pretty perceptive and incisive about what we’re trying to create, here. Worth a read. Thanks, Tim!