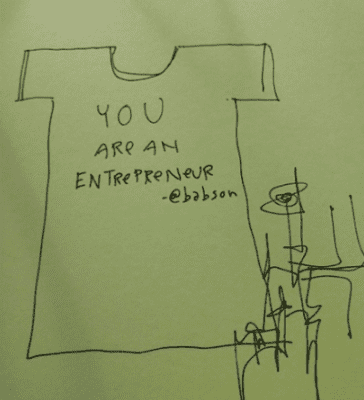 Our friends at Babson College have asked us to help out on their new campaign, “Redefine Entrepreneurship”. [Catch the backstory here, and watch the video here to get a rough idea etc etc.]

It’s a simple enough idea: If they can own a new idea of what entrepreneurship is, or at least, be a prime mover in the conversation, then people will go to them to get a piece of the action. Good for the students and faculty, good for the brand and good for the stakeholders. Exactly.

Of course, the meaning of the word has been redefined over and over many times already, from in its origins in the Industrial Revolution of yesterday, to Silicon Valley today, to India and China and Africa tomorrow. Language is organic and fluid, after all, and to hope to come up with the all-encompassing, definitive wording for it, isn’t going to happen in our lifetime. The word already has a million definitions, anyway.

But as I pondered this, more and more, I started thinking that the really interesting question isn’t, “What is entrepreneurship?”, but “Who is an entrepreneur?”

As Reid Hoffman declared in his wonderful new book, you can still think like an entrepreneur and hold a job down in a large company. In fact, it’s now pretty much essential for survival that you do so.

So I quickly drew the t-shirt idea above: “YOU ARE AN ENTREPRENEUR”.

The idea is not a “BIG STATEMENT” per se, but designed more as a conversation starter.

When people see the message, the people who already see themselves an entrepreneurs will think, “Yeah, so, I know that already.”

They’re not the people needing to hear the it.

But the people who DON’T see themselves that way, THEY WILL  question why somebody would think they’re entrepreneurs.

Which could start a lot of conversations right from the get-go. Imagine what your favorite Starbucks barista would say about the t-shirt. Or that guy you know who works at The Gap. Or your college roommate, Dan who works deep in the bowels of Zappos’ call centers.

Or think about the fourteen people you now have on the payroll, and how you’re going to convince them to think of their time with you as more than just a paycheck.

Aren’t they ALL entrepreneurs? Shouldn’t they feel that way? And if not, isn’t that a problem?

I think it is.

I mean, we’re talking about actual flesh-and-blood livelihoods here, surely that’s something worth giving thought to?

T-shirt-as-conversation-starter is far more interesting that T-shirt-as-advertisement, don’t you think?

Anyway, that’s my first salvo. I hope you like

It’s an outlook, not an output.

I don’t know how the terms “businessman” and “entrepreneur” play out in the US. But in India, there is a distinct class and generation consciousness about it.

While businessman can mean anything from a small shop owner to a tycoon, entrepreneur implies the new media and tech industry.

Moreover, the term entrepreneur does not carry any of the negative connotations that businessman does. Which in this context can mean lack of good education and pedigree.

Precisely why, the new and young business class never forgets to use entrepreneur some where in their list of credentials.