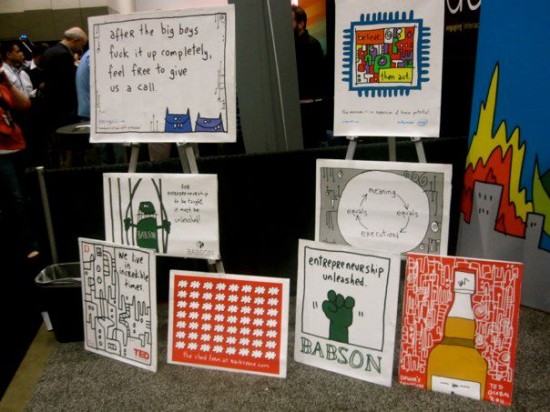 Above  are some of the social object cartoons we had on display the other week at Blogworld… clients including Rackspace, Babson College, Intel etc etc.

The one on the top left got the most reaction, I wonder why 😉

The mission continues: to spread the message that yes, social objects ARE the future of marketing.

I think it’ll take a while to spread but hey, there’s been some serious recent progress: In his big keynote at Blogworld, Jim Farley, the CMO of Ford Motors said, “Cars are social objects”.

Wow. I was right there in the audience, hearing it live. I could hardly believe it.

As you probably know already, I was turned onto the social object idea by the antropologist, Jaiku founder and former Google employee, Jyri Engstrom, at his big talk at Reboot 2005 (which has gone in history a one of the best tech conferences ever, btw).

A year before that, I had met Jyri for the first time at Joi Ito’s big geek dinner in London, where we talked about how blogging was all about “particle media”, whereas traditional broadcast was all about “wave media”.

And what do these particles consist of? Social Objects. Exactly.

Jyri knew what I meant, kinda sorta. You?

[CAVEAT:  This post is not a finely crafted piece of blog literature, witeen for posterity, but me just thinking outloud. But there’s some things in here worth thinking about firther etc.]