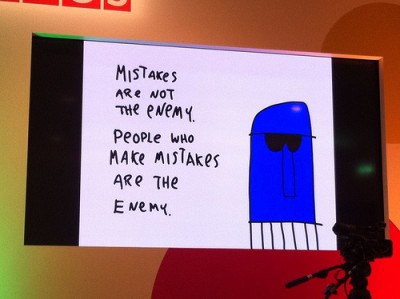 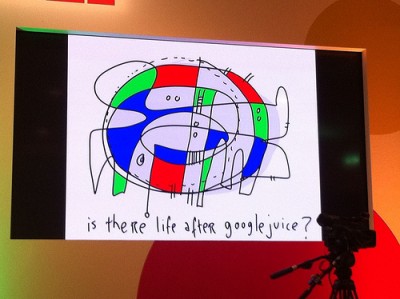 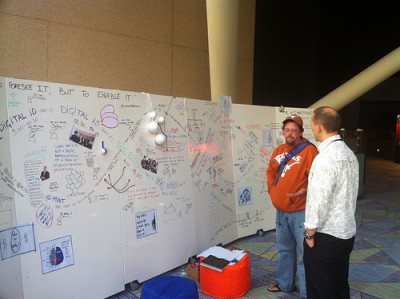 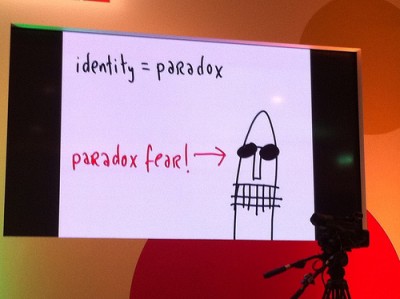 As followers of my Twitter stream will know, last week I was in Toronto, live-cartooning at Innotribe 2011.

Innotribe happens every year at Sibos, the ENORMOUS international banking and financial conference put together by SWIFT. Chris Skinner wrote a nice overview here, with the gapingvoid photstream over here.

My job was to “live-toon” drawings over the four day event, trying to take it all in while cranking out drawings at the same time, not unlike what I did recently at TED Global in Edinburgh.

There was a guy at the event from McKinsey, towing his employer’s party line, namely, that Big Data is the next frontier of innovation, competition and productivity.

In other words, where is most of the wealth in the next fifty years going to be made? In the Big Data universe.

And what do banks do best? Handle vast oceans of Big Data on  a daily basis, of course.

Pinky! Are you thinking what I’m thinking??!!

So, the future of banking will evolve, depending on how the movement of Big Data evolves… what we see as data.

And the people who can keep ahead of the curve will make a killing, of course they will.

This also falls into the interest sphere of Rackspace. They, and their competitors (Amazon, Microsoft, Google etc etc) are busy building all those new server farms for a reason.

Besides the reams and reams of new stuff to think about, I was delighted to see some of my old friends were attending Innotribe as well- Doc Searls, Stowe Boyd, Sean Park etc. Seriously smart people with interesting things to say.

On my last day there, I was talking to somebody about JUST how much more INTERESTING the Internet has made the world, for this cartoonist and a lot of friends of mine. Back when I was just a pup, the most interesting thing that could happen to a cartoonist would be, say, a gig at The New Yorker. Now here I am, hanging out with bankers, talking about Big Data, and drawing cartoons about it.

That’s what gapingvoid’s corporate work is always about- not to make people laugh per se, not for mere entertainment and decoration, but to start conversations. To disrupt. To move ideas forward. Even with a subject as “niche” as Big Data or whatever.

As I’ve always believed; Cartoons are one of the most efficient means of communication on earth. They have the power to transform businesses so elegantly, that ideally, the job is done before anyone even realizes. Rock on.