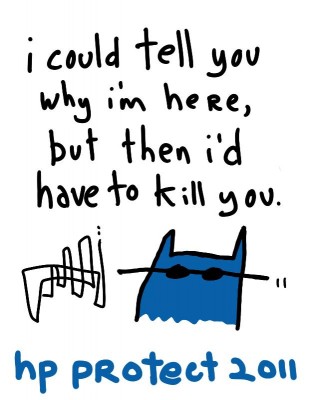 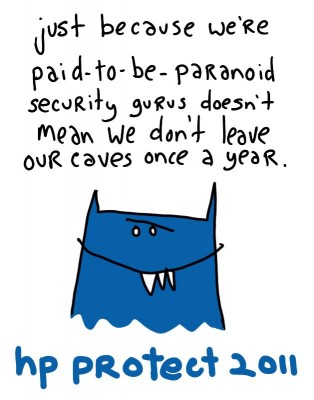 Hewlett Packard is kicking off its cybersecurity conference today, HP Protect 2011, and they kindly hired gapingvoid to design some posters for them.

Basically, I wanted to draw something kinda cool n’ fun, something that computer security people wouldn’t mind taking back home and hanging on their office walls.

To the uneducated, the cartoon might seem trivial, but actually, it’s not. Like Lennie Bruce famously said, “Humor is serious business”.

Fred Wilson is right, we are indeed in the middle of a major, long-term, global trasformation, and Obama (or anybody else who wants his job) is NOT, REPEAT NOT going to save us.

So what IS going to save us? The SAME DAMN THING that has ALWAYS saved us:

All serious work begins with serious play first. AND NOT the night before, but FIRST thing in the morning.You think Jony Ives works for a living? Hell, no, he plays for a living. So do I. So do my friends, Charles Hope, Seth Godin and others like us.

And YES, you can bring that sense of play anywhere- to a conference on cybersecurity, for example. Don’t get me wrong; cybersecurity is also serious business. Our collective safety and our livelihoods as citizens depend on it, and companies like HP work to help protect our culture’s critical infrastructure systems and generally keep us out of trouble.

It’s a nasty, dangerous world out there, after all…

That being said, security nerds are also people who like to play and get paid for it, more than most. They like to have FUN, at conferences and anywhere else, of course they do. Who says the good guys cannot be sweaty and unshaven? News to me. To PLAY means to HACK something. Hacking is INHERENTLY playful. Of course it frickin’ is.

Thanks to Hewlett Packard for giving gapingvoid the opportunity to live in a place it hasn’t yet i.e. the complex and mysterious world of cybersecurity i.e. the world where the hackers live and thrive happily. It’s good to know that some of them are on our side. So far, it’s been a blast. Rock on.