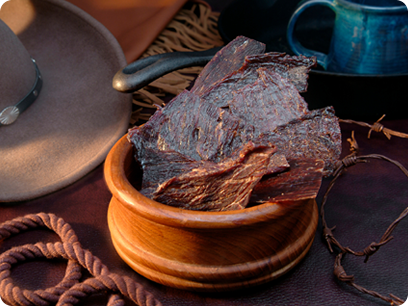 Not too far down the road from my house in Far West Texas, my friend, Glenn Short and his team make, and I kid you not, the best store-bought beef jerky I have ever tasted (And I have tasted A LOT over the years). The Lights Jerky Company is phenominal, check it out.

After a few years struggling to get it off the ground, business is booming. I met one of his people last night, drinking beer over at The Railroad Blues. He was just EXHAUSTED at the end of the day from busting his ass, filling orders. It was, how you say, the right kind of exhaustion to have…

Out here in the Texas desert mountains, where it’s ALWAYS been a tough place to make a living, I’ve noticed three kinds of business:

1. THE LOST CAUSES. New ones open and close all the time. Well meaning people who don’t really get what they’re doing, don’t really get what their customers are after, don’t really get much, in spite of their often valiant and kind-hearted efforts. Retired school teachers from Dallas, who never run a business before, who just moved out here recently because they liked the scenery, who SUDDENLY decided to go into the restaurant business or whatever. These places usually close down in less than nine months. They’re not uncommon.

2. THE COMMODITIES. Stuff you’d expect to see out here. Gas stations. Convenience stores. Fast food joints. Nothing too special, but they provide some needed service, same as any where else. Nice local people working there and all, but nothing to write home about.

3. THE TREASURED. These are the rarest birds. Products that are not only INSANELY GREAT, but are done with such, imagination, love, flair , or even just plain ol’ hard work and good manners, failure JUST isn’t an option.

And treasured they are. If you live out here long enough, you start to realize soon enough that if you don’t ACTUALLY TREASURE the businesses you love, I mean REALLY treasure them more than you would in a big city, say, these places will just close down eventually, just blow out of town like tumbleweeds. Their unique magic will be gone, forever, without nothing to take their place.

And people KNOW that.

Lights Jerky is one of these. So is The Pizza Foundation, The Marfa Book Company, Harry’s Bar, The Murphy Street Raspa Compaany, Novak’s Barber Shop, Tacos Del Norte, The French Grocer and The Saddle Club, just to name a few.

And yes, these businesses are Social Objects. When something happens in one of these places- somebody loses their job, or somebody gets sick etc- news travels WAY faster around town than with the other places. Because people ACTUALLY do care. BECAUSE they are treasured, the social dynamic is far more intense than in say,  a national fast food chain.

And what is true in small-town West Texas is true in any big city. You don’t have to be Amazon or Apple or IBM or McDonalds to be a social object.  You can be a small jerky company, bookshop or taco stand. As I’ve always said, “Meaning scales”.

But The Treasure Factor HAS to be there, somehow.

Is your business treasured? Or do people just give you money? Serious question…