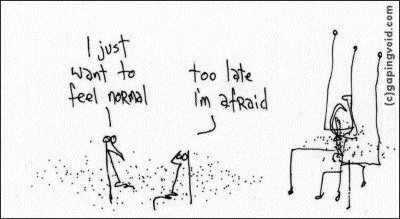 I’ve been there myself. I’ve shared TONS of my tricks of the trade over the years, which has indirectly helped my bottom line no end… And I have to say, it’s a good feeling to think you’re actually helping people in real and meaningful ways.

Sure, compared to how most people have to pay their bills, being a “guru” is not a bad gig, not a bad gig at all. And there’s some good ones out there, doing a splendid job helping people move their lives forward. No wonder why so many other people are also chasing after the very same gig, themselves.

But guru-dom has never sat well with me, somehow, no matter how good it was for business. And for the longest time I couldn’t quite put my finger on it why that was.

Then recently I got talking to an old friend, somebody who spent a lot of time practicing as an Eastern mystic, who studied under REAL gurus and knew all about gurudom. The closet thing to a real Holy man that I ever had the privilege of calling a friend.

Then one day he just gave it up completely. Just totally stopped. As he explained in his email:

I found enlightenment to be overrated.  It turns out that when this comes about, all of the Karma in your life comes due at once… both good and bad. I’ve had to pay the sufi master three times to get out of town and leave me alone.

Many groups, end up in a sycophantic embrace and I found that to be distasteful, be careful. Since we live so many lives, There is plenty of time for this state to take effect. I’d advise anyone to take it slow. However, there are a few good ones out there, who really aren’t into all these shenanigans.  At least that’s my experience.

Really believe that knowing the future creates a boring life, no surprises any more.  Remote viewing opens one up to things that one would rather not know. Powers of healing, brings all kinds of sick people around from all over the place and you end up tripping on them.  Deciples, needy and clinging. More and more I think that it is all about gaining the ability to hang in there and keep it together in the face of life’s shit-storms. I especially like the ability to make people laugh at the absurdityof it all. You already have that power.

There is a big difference between being an influencer with a blog and being a guru. But the same kind of thing applies. I never tried it because I never really had anything meaningful to say. If I said it, then there always seemed to be a certain “falsness” to it. The influencers have a cannonical form, that requires talking more than listening, and feigning listening, which is taken as agreement, when maybe it’s not. Which is dishonest. Charisma is a way of crapping on half the people you meet in such a subtle way, then they thank you for it.

i.e.  I don’t want to write about how I can help random people do great work, I want to TRY to do great work myself, and CELEBRATE other people who are ALREADY doing it.

But maybe I’m weird for thinking that…

>> I don’t want to write about how I can help random people do great work, I want to TRY to do great work myself, and CELEBRATE other people who are ALREADY doing it.<< Great to hear. Sometimes it seems that the market for great self-help is infinite. But the customers are just looking for someone to follow. Forget about leading/following and just do your own work. I guess it's a big temptation for people who are good a developing a tribe. I've seen some people with really good insight stop being insightful and start talking about how everyone can be insightful in their own way. Yeah. Maybe. Who cares.

I just made a major transition in my life by leaving IT and entering Fine Art. I find I am very productive, but it isn’t the relaxing journey I expected. It is damned hard work. I am exhausted at the end of the day and I do not feel any closer to “the answer” than I have at any other time.

The author of Jonathan Livingston Seagull wrote a book about Gurudom after the success of his Seagull book. How the Guru in the midst of a large assembly of his disciples just decided to disappear and lay low. He had had enough.

One of the drawbacks of writing for your peers is often you give people too much credit. They don’t live up to your expectations. They act like dumbasses.

An example I can think of is the first social network called Electric Minds, an experiment by Howard Rheingold. He thought everybody would be level headed and democratic in his forums. They turned out to be a herd of pigs. As a consequence Howard filtered through all the participants and created a gated community, Brainstorms, where interesting minds could meet. Eventually the interesting minds all left due to an abundance of navel gazers.

So if you have peers, shepherds, instead of disciples, dumb sheep, you can expect to have your work cut out for you. But you will make some genuine friends.

Hugh, your friend describes the gut feeling I’ve always had when I come into contact with “charismatic” people. They’re charming, friendly, warm, helpful, interested and interesting…but in the back of my mind, I always have this niggling suspicion that they’re laughing derision at everyone around them.

Which, of course, leads me to get as far away from them as I possibly can.

So, there’s my main reason for never wanting to become a “guru”! But I’m with you, I also don’t want a following of peeps who expect me to solve their problems. I’d much rather advocate us all learning and growing *together* and staying connected simply by being messy humans doing messy human things.

Sitting on top of a pedestal is a lonely, isolated proposition. Let’s all screw up together and fall flat our our faces together and help each other up.

I read a few blogs (tempted as I am to say religiously, I won’t). I do not, however, become an official “follower” of any of them – including my sister’s blog. She was annoyed about this. She thought she knew why. “You don’t see yourself as a follower,” she told me. “You always want to be the leader.” As true as this may be, that’s not the reason. I just don’t think any blogger, anywhere, deserves “followers”. I read Hugh’s blog every day- but I won’t “follow” it.

I translate the word “follower” to something I don’t have a single word for, but means “someone who likes this enough to put their name on the line for my being worth reading.” Which puts the focus off of my status and back onto the inherent value of my output. It’s flawed, but it makes it bearable.

This reflects my own approach to others’ writing, which has never been worshipful, but can still make me think and help me grow. I’ve never been much of a guru because I have it too firmly in my head that everyone should do their own thinking. But I’m just starting to develop a, ahem, following /flinch/ so my views could well change.

Hugh… I aspire to doing great things and great work… Achieving a level where we considered each other peers would be awesomeness defined… However… I ain’t there yet… It’s a struggle… I hear you though… But until that celebration: I’m sure whatever you write will probably continue to help me and others. You see, we’re not random people from our own perspectives. Thanks for your work. G

There may be another reason you avoid guru status, Hugh. Gurus dispense wise statements. Creative types create things whose very existence is enlightening. This is what I hope my songs do, at their best.

To put it a little less pretentiously: We like to create things that make people go “Yeah.”

One of my current favorite examples is a cartoon of yours: “‘I can’t take this shit anymore,'” he said, mistakenly.” I got a good laugh out of it. A moment later, I also realized that necessary changes were not going to happen in my life if I sat around waiting to hit bottom.

If you’d written an entire book on the subject, it wouldn’t have had the impact of that one cartoon.

Yep, that’s one of my al-time favorite cartoons…

Looks you have a bunch of aspiring sycophants following you. If I were you I would run.. now, before you start to believe their bullshit. Even if you don’t send them away, they might believe that you are buying their bullshit.

With followers like these, you can’t avoid them putting you up on a pedestal. I’m sorry to inform you that you’re stuck as a Guru, buddy. You don’t call it, they put you there. You can’t shake them. That’s it, you’re fuuuuuu…ed.

You’ve told them that you don’t want no stinking disciples and all of these hypocrates start sucking up to you saying that they are not really following you when they really are.
What I can’t understand is why they want your approval when I know that you really couldn’t give a shit?

I wonder how many of em are Catholic.