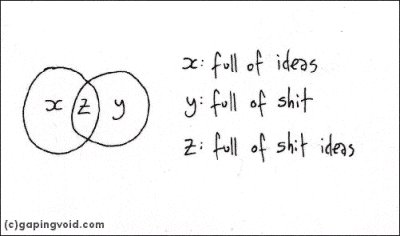 I’m not sure why all the fuss, to be honest.

More than a few people were concerned that by not doing the Twitter-Facebook thing, I wouldn’t drive so  many people to my blog.

To which I replied in the comments:

“I’m sick to death of hearing the phrase, ‘Driving traffic to your site’.

People should come to your blog, not because somebody drove them there, but because it was important for them to come there.

And the trick to Web 2.0, as in business, is to be UNLIKE everyone else.”

Granted, that might be a wee bit too purist for most people, still, Kathy Sierra left a great comment:

From John Mayer’s address to grads of Berklee College of Music:

And possibly more alarming, Mayer realized that pouring creativity into smaller, less important, promotional outlets like twitter not only distracted him from focusing on more critical endeavors like his career, it also narrowed his mental capacity for music and writing intelligent songs.

“The tweets are getting shorter, but the songs are still 4 minutes long. You’re coming up with 140-character zingers, and the song is still 4 minutes long…I realized about a year ago that I couldn’t have a complete thought anymore. And I was a tweetaholic. I had four million twitter followers, and I was always writing on it. And I stopped using twitter as an outlet and I started using twitter as the instrument to riff on, and it started to make my mind smaller and smaller and smaller. And I couldn’t write a song.”

You see where I’m going with this?

Whatever. The issue really isn’t Twitter or Facebook, the issue is, if you’re spending more time promoting your stuff and chit-chatting to people about your stuff than your are ACTUALLY MAKING stuff, you’re doing something wrong, VERY wrong [Believe me, I’m as guiity of this as anyone. I have BEEN there, more than once.].

Quit your yakkin’ and get busy. Quit wasting time obsessing about pimping your ass and checking your stats. Instead, MAKE stuff. Make AMAZING stuff. Make stuff that is so good that people have no choice but to find out about it. Otherwise, you REALLY are just wasting your time. This game is already TOO hard and TOO BIG a time suck to fritter away on what is, for the most part, a big ol’ distraction.

There. I’ve said my piece. This is hopefully my last blog post on the subject. I’m getting back to what I do best: Writing books, drawing cartoons, selling art and helping my clients kick ass. Amen.

[PS. I’m not completely stupid and out out of touch; I do realize that A LOT of my friends still use Twitter at the expense of everything else (including RSS) and may need some time to adjust, so for now, we’ll still using my Twitter account to retweet links to my blog, just like Seth Godin does with his. But I won’t be spending any personal time over there, either. In fact, I’ve given my log-ins to Laura (she runs my gallery operations) and asked her to handle it instead. My personal online presence will just be here on my blog, and of course the newsletter. But I’m pretty much done with everything else…]