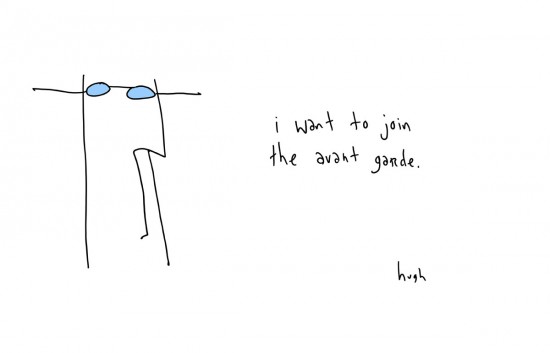 From Wikipedia: “The term was originally used to describe the foremost part of an army advancing into battle (also called the vanguard or literally the advance guard) and now applied to any group, particularly of artists, that considers itself innovative and ahead of the majority.”

I just think it’s kind of funny, a picture of this dull, unremarkable guy getting all despondent because he’s not “cutting edge” or whatever.

But I don’t think one chooses to be ahead of one’s time. It kinda just happens, with all the other crap, otherwise known as Life.

Which is where the humor in the cartoon lies…

This dude has disgruntled blogger written all over him. Hysterical.

this is so funny 🙂