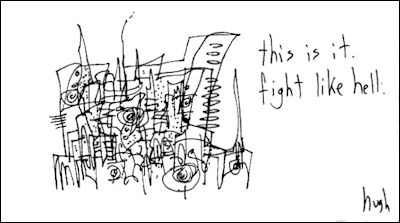 I remember my first really big Internet “A-Ha!” moment like it was yesterday.

It was about a decade ago, just after the DotCom crash, around the same time I first heard about blogging.

I had just heard from somewhere that Salon.com, one of the first big-time magazines to launch exclusively online (that was still a big deal in those days) had blown through $60 million setting itself up, before the crash. Was it ever expected to make back its investors’ money? Of course not.

Then I heard from somewhere that Arts & Letters Daily, a blog that appealed to the same kind of reader as Salon, had been set up for a couple of grand; I think $10K was the number.

People would tell me at the time that yeah, of course Salon was more expensive. It had an office in San Francisco and a big staff of proper journalists. It had all the overhead of conventional magazines, minus the paper and printing press. A&L Daily was just an aggregator blog that pointed to interesting bits and pieces across the web.

Yes, that was true, but as a random, semi-educated dude looking for a place that offered me something interesting to read on a regular basis, I preferred A&L Daily to Salon.

As far as I could see, A&L Daily was not only a better product, it was offering its better product for ONE SIX-THOUSANDTH the cost of Salon. For 0.0166% the overheads.

The idea that media could now be viably made for not just pennies on the dollar, but MICRO-PENNIES, hit me like train. BAM!

So I started blogging. The rest is history.

Ten years later, my only disconnect would be, with this amazing opportunity that hyper-cheap media offers us, why are so many of us squandering it?

While others Twitter or Facebook or Foursquare for hours on end about what hipster food truck they’ve just been to or what dumb TV show they just watched, my young cartoonist friend, Austin Kleon is using social media to transform his life and career (and the lives and careers of others).

This is a totally different league of Internet use I’m talking about. And Austin is just one example. So am I. So is John T Unger or Willo O’Brien of Willotoons fame. I could give hundreds of others.

The Internet has given you a HUGE, life-changing opportunity that simply didn’t exist a generation ago. Don’t waste it. A life just surfing the net for hipster-friendly dumbass stuff is no less a waste of a life than sitting in front of the television.

The way to use the Internet is to be more like Austin or Willo or John. Use it seriously.