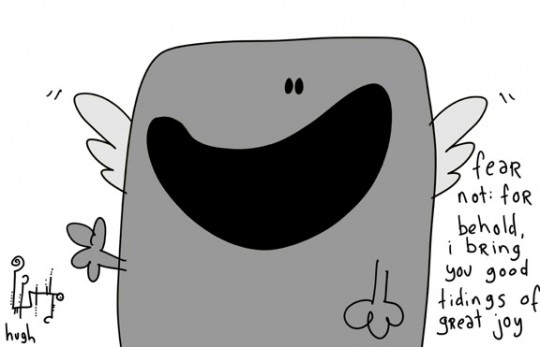 [A different angle on the Angel Gabriel etc. You can get the print here etc.]

This is why I love the internet…

In the old, pre-internet days, if you were a cartoonist like me and wanted to be successful, you pretty much had to be famous.

Not hugely famous necessarily, but somebody with a pretty major publishing gig. Like Peanuts, Doonesbury, Dilbert, Garfield or Bloom County, or some of The New Yorker heavyweights like Steinberg or Ronald Searle.

And those gigs were hard to come by. You needed a big time publication syndicate or media company to back you. And then the newspapers, the advertisers and the media landscape in general had to be on board as well.

And of course, all this required a VERY large audience. Millions of people, literally. Just so you could make an OK living.

As we all know, the more people you need to keep happy, the less likely that’s going to happen, or at least, the less you can control. Mass audiences are a fickle, unpredictable bunch. And they have a nasty habit of ignoring people like you completely, and going for people like Justin Bieber or Paris Hilton instead.

Which is why I never took this route. Too many variables I couldn’t control. And my work was never mainstream enough, anyway.

Thank God the internet came along and changed everything. Suddenly I found myself making a damn good living, without having all those mainstream hoops to jump through first. Just by doodling wee, non-mainstream cartoons all day, to what by old mainstream standards would be a TINY audience that I reach via this blog, Twitter and my newsletter.

This is made possible because the web, as we all know, is  a SUPERB way to sell relatively high-end products. In my case, private, client-based commissions are worth THOUSANDS AND THOUSANDS of times more than the advertising eyeballs that ultimately pay for the newspaper cartoonist’s mortgage. Of course they are. Not to mention, the commissions are fun and intellectually interesting to work on.

Which is why my advice for anyone trying to succeed on the web is, make the highest-end product you can, and then target the tiny handful of people- the microaudience– who are likely to buy it. Forget the masses. Targeting the latter is too much like trying to win the lottery- though great when it happens (however unlikely), there are just too many damn variables outside your control.