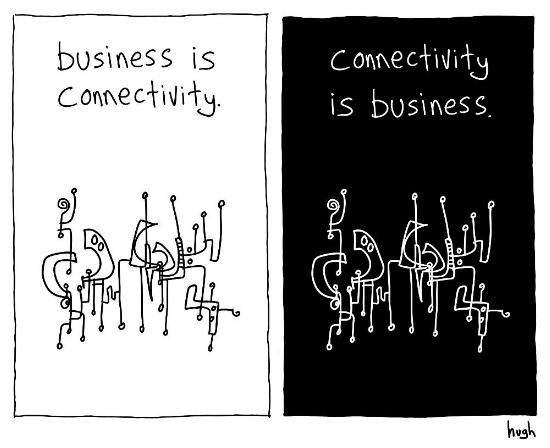 [NB: This post was written by my business partner, Jason Korman. Expect to hear more of him round here in future etc. -Hugh]

Back in the Spring, we were approached by Troy Janisch, Digital Marketing Manager at American Family Insurance about creating a Cube Grenade that encouraged their 8,000+ employees to participate in their social media program.

Troy said that they wanted their 3,800+ agents to build stronger ties with their communities and also engage other employees who the company want to have a voice and share in the new vision for the business.

AmFam has a very particular market: Local communities in eighteen states in the West and Midwest, selling home and life policies to middle income families. For their local insurance agents, community is everything and the stronger their ties, the better their business- it’s that simple.

With this in mind, the goal was to have 50% of all agents online, using at least Facebook, but hopefully some other tools by year’s end.

If you think about it, its hard to imagine a more elegant use of tools like Facebook for building business.

On our side, Hugh’s goal was to create a ‘conversation starter’ – something that would, on the face of it, explain to the digitally uninitiated (a) why they should make developing online connections, a top priority, and b) remind the reps what building THEIR business is really all about. The solution ultimately was two drawings: “Business is Connectivity” above, and “We’re not in the insurance business, We’re in the Connection Business”, below. 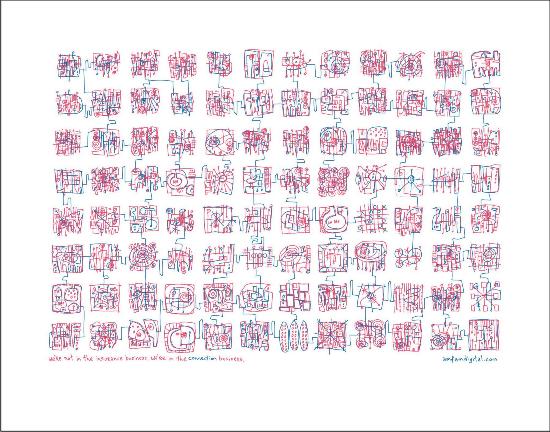 A few weeks ago, I checked back in with Troy to see how things were going. For Troy, he wanted to nudge along a Smarter Conversation on a number of fronts and had a plan that not only called for the organic spread of the Cube Grenades through the business, but also, one that was an overt, front and center challenge to the culture of the business. As Troy said, his goal was to ‘Nudge the culture Forward’ i.e. “To Change the culture from Sales Orientation to one of Customer Orientation,”

After commissioning the Cube Grenade, AmFam, put up an exhibit of about a dozen of Hugh’s more inspiring works. They included: Intoxicated, X,Y,Z and the clean version of “Quality”. The exhibition was put up in a “bold location” in their headquarters in Madison, where it would be seen by all the employees over the period it was up.

While the spread of the Cube Grenades is happening. People are printing them out, and putting them on their email signatures, the art exhibition really got people’s attention, and not in the way that was originally planned.

A lot of attention was focused on the “Quality” image, one of Hugh’s most popular cartoons, and one that was redrawn in a Safe for Work mode for software giant, SAP, earlier this year. It seems that in Madison, Wisconsin, “Fricking”, is not yet quite Safe for Work, so it provoked a lot of ‘discussion’ about the appropriateness of the piece. However, this was the opening that Troy wanted. He turned the conversation into what the idea of “Frickin’ Amazing” means to a company like American Family, and ultimately, he had is objective in the crosshairs: “Customer Service”.

As Troy says “ Nobody starts the day thinking that they will give bad customer service, but it’s the culture that makes the difference as to whether it gets delivered,” he continued, “Everyone says that they have Customer Service, and many do, but Customer Service is not simply top down, it is how everyone actually acts, as opposed to aspires to act.”

And therein lied the rub, and the notion of having a “Smarter Conversation” internally about Customer Service, what’s wrong with it, and how to make it “Totally Frickin’ Amaxing”, and more importantly, how do you create a culture that supports people taking the risks necessary to deliver ‘Totally Fricking Amazing Service”. Creating that internal dialogue is not something that happens by itself, but if the goal is to nudge along the culture of an 8,000 person business, disruption is the order of the day.

We’ll be checking back in with Troy to see how things are progressing. But as Troy says, “The Connectivity Cube Grenade is about reminding people at HQ that the business is out in small communities, which is the heart of their business’ and whether the folks are on the front line, or in the call center in Madison, every voice is part of the brand, and everyone makes a difference.”