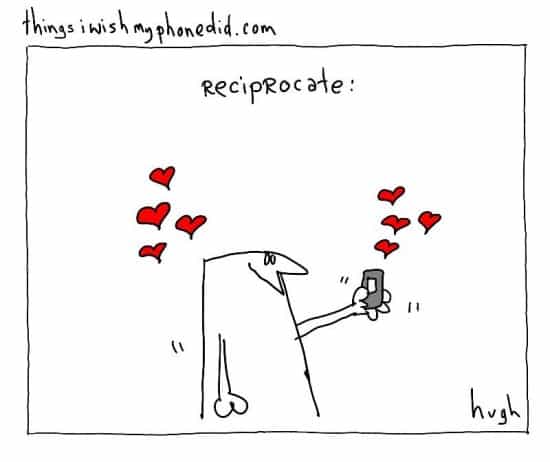 Things I wish my phone did. Dot com. It’s a website we’re building for our client, Line2.

It should be up in a wee bit… we’re hoping to have a lot of fun with it- an “Idea Amplifier”, as it were.

Re. The cartoon above: No matter how much you love your new state-of-the-art phone, it can’t love you back [For now, that is].

Now, of course, most blogs are one-person operations. Which means that successful blogs are often run by restless, outward-bound people in a hurry. And a lot of bloggers either have day jobs or passionate sidelines. I think that’s a good thing, even when they fail. It’s frustrating for me to hear, “stick to your blogging,” when people criticize a project created by a blogger–because it’s part of the blogging, part of the learning, part of what’s unfolding. I’d rather read a book that’s informed by the activities (not the reporting) of the writer, and I’d rather read a blog that’s based on the successes (and failures) of the blogger.

Which brings us to Hugh MacLeod and his work for Microsoft. Some critics think he’s selling out. I don’t. I think he’s having a huge impact on an organization –from the outside– at the same time that he demonstrates how just about any large organization can rethink its role in the world. And he’s doing it in front of all of us, without a net.