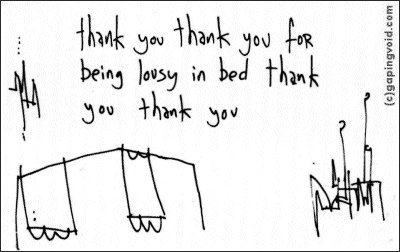 If your company wants to succeed, it needs to have a social object marketing plan.

Amen to that. But note what Chris also says:

I don’t know about you, but when somebody walks by with an iPhone, I notice. If I see a kid stroll by me in some limited edition Nikes, that registers with me too.

Therein lies the rub. The Social Object idea is easy to get if your product is highly remarkable, highly sociable. An iPhone or the latest pair of Nike’s are both fine examples of this.
But I can already hear your inner MBA saying, “Yeah, but what if you don’t work for Nike or Apple? What if your product is boring home loans, auto insurance or… [the list of boring products is pretty long].
My standard answer to that is, “Social Gestures beget Social Objects.”
Which is another way of saying, maybe the way you relate to somebody as a human being plays a part in all this. Maybe describing the product as “boring” is just one more bullshit lie we tell ourselves in order to make the world seem less complicated and scary. Hey, my product is inherently dull and boring, therefore I get to be inherently dull and boring, too. Hooray!
Nowadays, thanks to folk like Nike, we think of sneakers as “non-boring” brands. This wasn’t true when I was a kid. Back then sneakers were those bloody awful $3 plimsolls we wore in Phys Ed. But it took companies like Nike and Adidas to come along and by shear force of will, raise the level of conversation in the sneaker department, before sneakers became bona fide global social objects, bona fide global powerhouse brands.
The decision to raise the level of conversation isn’t economic. Nor is it an intellectual decision. It’s a moral decision. But whether you have the stomach for it is up to you.
Like I told Thomas almost 3 years ago re. English bespoke tailoring, “Own the conversation by improving the conversation.” And hey, it worked. His sales went up 300% in 6 months.
It wasn’t the change in product that made Thomas’ suits Social Objects. It was changing the way he talked to people. The same applies to Stormhoek, which 3 years ago was an $8 bottle of South African wine nobody had ever heard of. Conversation. Matters.
So all you corporate MBAs out there, here’s a little tip. When you planning on how to embrace the brave new world of Web 2.0, the first question you ask yourself should not be “What tools do I use?”
Blogs, RSS, YouTube, Twitter, Facebook- it doesn’t matter.
The first question you should REALLY ask yourself is:
“How do I want to change the way I talk to people?”
And hopefully the rest should follow.
Think about it.
[Bonus Link: For a more academic take on social objects, check out this post from Anthropologist, Jyri Engestrom.]