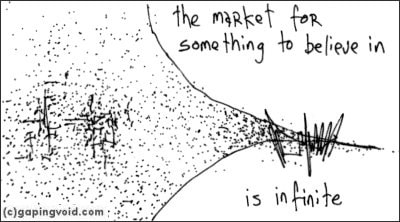 One evening Father Steven, the elderly priest who baptized more than one of my nephews and nieces, came over to my mother’s house for dinner. I was there, too.

Father Steven is a lovely guy. Deeply spiritual and very smart. Very learned in theology and the history of the Roman Catholic Church, though not Catholic myself I always looked forward to discussing “The Big Stuff” with Father Steven for hours on end.

That evening over wine and cheese, I was telling Father Steven how during a particularly rough patch in my twenties, somehow I got into the habit of carrying a small Bible around with me everywhere in my day pack. Not quite sure why. Being the good former choirboy, I’ve always read the Bible in bits and bobs, here and there, all my life. I told Father Steven I thought it was rather odd, even though at the time the Bible accompanied me everywhere, I didn’t read it any more than I did in my non-day-pack days. I just liked having it around, as it were.

“Ah, that’s quite common,” said Father Steven. “People have always carried The Bible around as a talisman.”

From Wikipedia: A talisman (from Arabic ????? tilasm, ultimately from Greek telesma or from the Greek word “telein” which means “to initiate into the mysteries”) is an amulet or other object considered to possess supernatural or magical powers.

Basically, a talisman is an object that has been given meaning that far exceeds any actual function. A good luck charm. Or a crucifix. A St. Christopher’s medal. A Star of David. Or that friendship bracelet your girlfriend gave you when you took off to France without her for six months “in order to find yourself” or whatever. A reminder of an idea or an identity.

As is that $150 pair of sneakers that you think are going make your exercise more often, that too is a talisman; that too has totemic power. Or that $400 smartphone that’s going to get you more organized and focused about your career. Or the author’s signature inside the jacket of your favorite book. Or yes, that gapingvoid print that’s going to hang in your office and help you to stay upbeat and motivated when you’re having a blah day. Or getting “Linchpin” tattooed on your arm.

And this is no different than watching some well known tech blogger like Scoble walking out of an iStore, waving his latest Apple gizmo to the video phones and cheering crowd, after he spent three night waiting in line, in order to be fist in the store to buy one. Right then and there, the Apple gizmo has tremendous talismanic power.

And of course, so does your “Object-Idea”, if you’re fortunate enough to have one. Huge power.

Why do we seem to have this insatiable and irrational desire to surround ourselves with talismans, totems and Object-Ideas? Because they represent meaning to us. And like the the cartoon above says, we have an infinite need for that.

[The Object-Idea archive is here.]