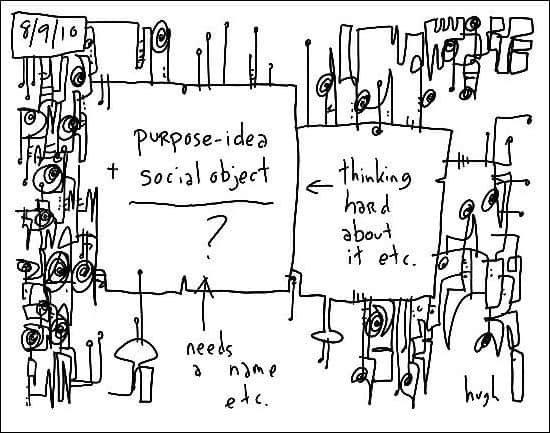 I’ve been working on a problem lately…

[Quoting Mark Earls:] Put really simply, the Purpose-Idea is the “What For?” of a business, or any kind of community. What exists to change (or protect) in the world, why employees get out of bed in the morning, what difference the business seeks to make on behalf of customers and employees and everyone else? BTW this is not “mission, vision, values” territory – it’s about real drives, passions and beliefs. The stuff that men in suits tend to get embarrassed about because it’s personal. But it’s the stuff that makes the difference between success and failure, because this kind of stuff brings folk together in all aspects of human life.

In his brilliant book, “Welcome to The Creative Age,” Mark Earls, then one of the top advertising planners in London, coined to term “Purpose-Idea”, as a more interesting, engaging and human term to replace the word, “Brand”. The latter he viewed as an outdated, overused and mostly meaningless concept.

Though I loved the book [“Purpose-Idea” is one of the most explosive “A-Ha!” moments I’ve had in my entire career], it soon became apparent to me that a Purpose-Idea doesn’t live in a vacuum. It needs to be articulated via a Social Object, so the idea can spread. Ideas spread not on their own steam, but as social objects. “Hey Gang, what do y’all think of this idea” etc etc. The Microsoft Blue Monster was a good example.

After the success of The Blue Monster, I wanted to create more of these…

So I started drawing Cube Grenades with EXACTLY THAT in mind.

But in order to explain what I was talking about, it needed a name. Something more descriptive than say, “Blue Monster” or “Cube Grenade”, terms which are both utterly meaningless without a lot of backstory and context.

So recently I’ve been using the term, “Object-Idea”. A bit of a mouthful, maybe, but it works for now.

So what does this have to do with anything?

Well basically, I’ve been telling the ad agency world for while now, “Guys, you’re no longer in the Message business, you’re in the Social Object business.”

In fact, they must be, if the ad is to work. The “Whassuup” campaign for Budweiser [which was actually written by my old advertising buddy, Vinny Warren] didn’t work because the ad was THAT great artistically or convinced you of the beer’s quality.

It worked because suddenly millions of young adults the world over started saying “”Whassssuuuup” to each other. The advertising message, “Whassuup” had become a social object. An utterly massive one.

In the advertising & marketing world, successful social objects [Often called “virals”, especially when talking online] are a good thing. Every brand manger and his uncle dreams of one day creating the next Cadbury’s Gorilla.

But a social object on steroids i.e. an Object-Idea, is far more powerful.

Because it’s actually talking about stuff that actually matters to people. It’s not enough for people to like your product. For them to really LOVE it, somehow they’ve got to connect and empathize with the basic, primal human drives that compelled you create your product in the first place. The Purpose. The Idea. Otherwise you’re just one more piece of clutter to them.

The Object-Idea might catch on within the advertising & marketing world, it might not. It might need refining on my part- maybe a lot, maybe a little- we’ll see. But I sincerely believe that the people who really get it will have a considerable advantage over their peers who don’t.

The Object-Idea. You heard it here first, Folks. Rock on.

[N.B. “Social Objects” is a term I did not coin myself, but was turned onto by the anthropolgist and Jaiku founder, Jyri Engestrom.]