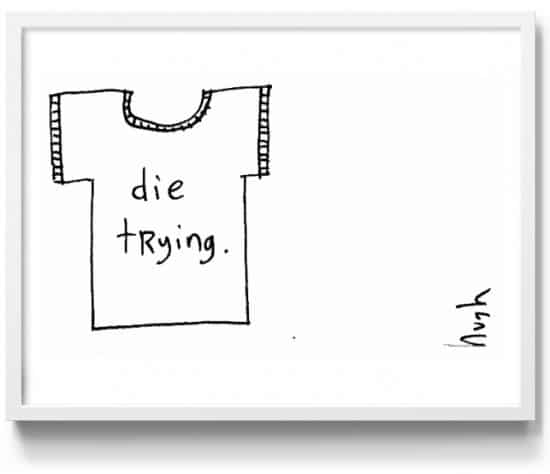 [“Die Trying”, which I sent out in the newsletter recently etc.]

Blessed is She who gets to say, “I’m going to make this damn thing work, or die trying”.

And ACTUALLY means it.

I get that feeling from a lot of the Cube Grenade competition people. Feels good to know that I’m not alone, that I’m not the only crazy person out there.

P.S. Today was MEANT to be the final day to submit an idea, but I’m extending it for another week, till next Monday, 9th August. The reason being that I’ve been traveling so much the last couple of weeks, I’ve not had time to tend to it properly. So I’m giving myself some slack.

Re. Recent submissions. Here are a couple that made me smile. Hard.

1. Noah Fleming and his wife are expecting. So instead of wanting a Cube Grenade for his business or whatever, he wants one for all the unborn children of the world. Wow. Hard to argue with that sentiment.

2. Somebody nominated his wife, unfazed by the possibility that this might be against the rules [it’s not, as it happens]. “She’s now working hard to blaze her own path with an artisan pecan candy she calls Blazin Brittle, a spicey brittle she thinks perfect for the Texas tongue.” Folksy traditional Texas treats are very dear to my heart [Beef jerky, Anyone?],so that resonated with me. Of course it did.

3. Race Face gets the the Upscale Bicycle Geekery Award. Hurrah!

So what do these three ideas [and the others] all have in common?

That’s right. They all have a VERY strong “Purpose-Idea”. To quote Mark Earls for the second time today:

Put really simply, the Purpose-Idea is the “What For?” of a business, or any kind of community. What exists to change (or protect) in the world, why employees get out of bed in the morning, what difference the business seeks to make on behalf of customers and employees and everyone else? BTW this is not “mission, vision, values” territory – it’s about real drives, passions and beliefs. The stuff that men in suits tend to get embarrassed about because it’s personal. But it’s the stuff that makes the difference between success and failure, because this kind of stuff brings folk together in all aspects of human life.

WHY we do something is ALWAYS a more interesting question than WHAT we do.

i.e. “Meaning Scales”. That’s what Cube Grenades is all about. And I intend to get that point across to the world, even if it kills me.

I can think of worse ways to “Die Trying”. You?

I am very happy my submission made you smile. Your work makes me smile everyday.

Thanks for the inspiration! I do work with vision, mission, and values – but in an inner-centred way – to support others in creating their own purposeful and meaningful work! Thus making their contribution to the whole. I trust that what’s truly inside each of us is needed in this world! My approach is way outside the “traditional” educational and business models and your art today sums up my journey with this work!

That should ready every day and not everyday.

Love this. The what for is essential. I think that people need to feel free not only to have one, but to have one that is really their own and that they really thought about.

I’ve been consistently impressed and delighted with yours… there aren’t any others with your medium out there.

Thank you thank you!

[…] blessed is she who gets to say, “i’m going to make this damn thing work, or die trying” by Hugh MacLeod […]

This is so true, finding work that fires you up is a gift. When you have difficulty explaining how much your work means to you because you’re that passionate about it, then I think you’re on the right track.

Hi all,
Hugh’s last words “…even if it kills me” reminded me of a song.
It’s called “Even if it kills me” too, by Motion City Soundtrack, a band from Minneapolis with some of the most HONEST lyrics around. The singer has gone through alcoholism and panic attacks (insert appropriate medical condition here)and so he wrote this song in a kind of a lucid moment. This whole idea of die trying reminded me of the process he talks about in the song. I think one way or the other we all go through it in a certain aspect of our lives.
Here’s how the song ends:

For the first time in a long time
I can say that I want to try
I feel helpless for the most part, but I’m learning to open my eyes
And the sad truth of the matter is I’ll never get over it,
But I’m gonna try
To get better and overcome each moment
In my own way…