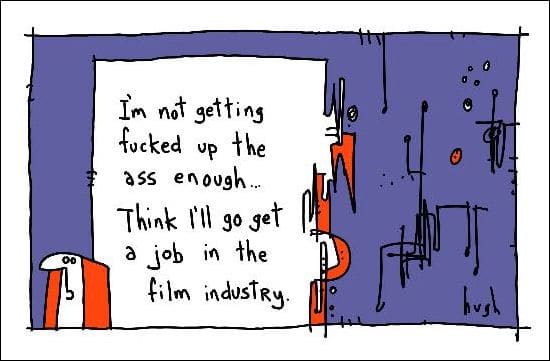 This is a colorized version of a cartoon I once gave to my old friend, Lee Thomas, the guy who pretty much single-handedly brought Web 2.0 geekery to the British film industry. He works for Simon “Shaun Of The Dead” Pegg’s production company these days…

The film business is a funny old thing. Imagine a large pyramid scheme with a few rock stars like Ashton or Quentin Tarantino on the top, with HUGE LEGIONS of slave labor/waiters on the bottom, with a thin layer of weird-ass, paranoid “Neither/Nor’s” separating the two.This is just as true in London as it is in Hollywood.

Even at his level, well… Ashton wasn’t always famous, he too was a member of the “HUGE LEGIONS” at one point, so he should be able to relate to the cartoon. Rock on.

[Ashton, we’ll be in touch soon via [email protected] to collect your details for the back of the card, so we can print & ship a free box of 100 to you etc. Thanks!]