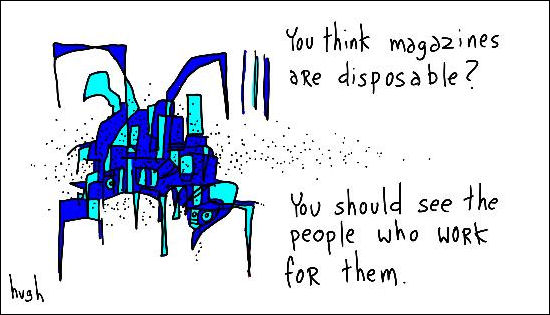 Today’s “Daily Bizcard”, “Disposable”, goes to Sally Singer, the new editor of The New York Times’ T Magazine, who was until recently the fashion and features editor of Vogue Magazine. Backstory from the NYT:

Ms. Singer, 45, will take over in July, according to a note Bill Keller, executive editor of The Times, sent to staff members on Tuesday.

The move essentially completes a swap of editors between The Times and Condé Nast, the publisher of Vogue. The T job opened up after its first editor, Stefano Tonchi, moved to another Condé Nast fashion magazine, W, in April.

Ms. Singer worked in a variety of roles for different publications before joining Vogue in 1999. Her stops have included a stint as fashion director at New York magazine and as an editor at the London Review of Books, and she has written for The Economist and The Atlantic Monthly. She studied at the University of California at Berkeley and Yale.

“Disposable” is a color version of one of the cartoons that appear in “Ignore Everybody”. I drew it soon after a brief stint in LA in early 2000, where I was helping a friend with his indie magazine start-up. An interesting experience, but man, is that ONE TOUGH little business. Totally brutal and totally underpaid. To rise to Sally’s level is quite an impressive achievement, to say the least, so good luck to her with her new gig.

[Sally, we’ll be in touch soon via [email protected] to collect your details for the back of the card, so we can print & ship a free box of 100 to you etc. Thanks!]