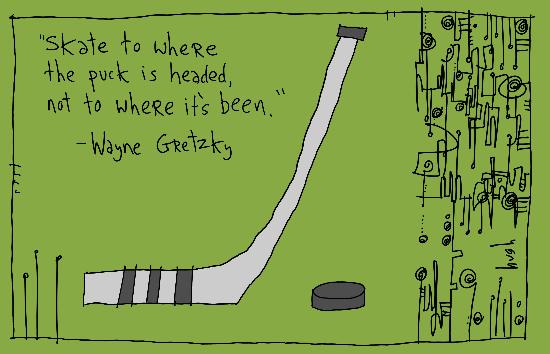 Fred is very successful venture capitalist, a partner in Union Square Ventures. I first became aware of him via his blog, AVC.com, which I was turned on to by Nick Denton.

Besides always having an interesting and entertaining take on the tech industry, what separates Fred from the other VC bloggers (and I believe he was the first to do this), is that he talks about other stuff on his blog besides his business. He talks about his family with great love and affection, he likes talking about his hobbies, and he REALLY likes sharing his music collection with people, turning folk on to his favorite albums etc.

I know from talking to Fred that Wayne Gretzky’s famous quote, “Skate to where the puck is headed, not to where it’s been” is a favorite of his. So I incorporated it into the design; I also used the same olive green from his USV website.

Keep blogging, Fred. We need more like you out there…
[The Daily Bizcard archive is here etc.]

[Fred, please send me an e-mail at gapingvoid@gmail.com with your shipping address and the details you want on the back of the bizcard, and I’ll send a free batch of 100 to you. Thanks!]