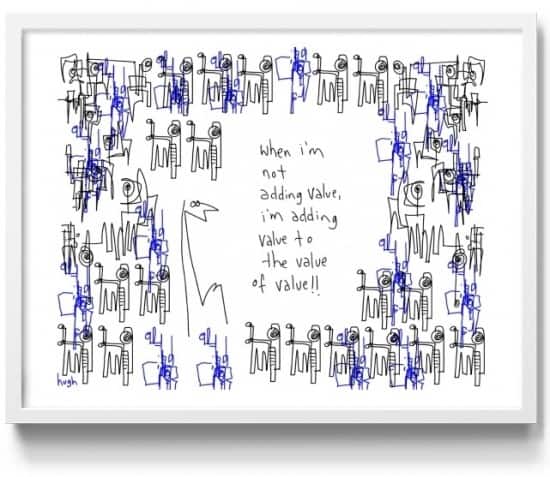 [“Adding Value”, which I sent out in the newsletter recently. You can buy the print here etc.]

A decade ago Howard Schultz, the founder of Starbuck’s wrote a great little book about entrepreneurship, “Pour Your Heart into It: How Starbucks Build a Company One Cup at a Time”.

One story from the book that really stuck with me, was about Starbuck’s first REAL BIG crisis, sometime in the 1980s.

Starbuck’s was left with one of two choices, neither of them good:

Research had indicated that, if they lowered the quality with cheaper coffee, only 10% of their customers would have sufficient palates to be able to tell the difference. However if they raised their prices, EVERYBODY would be able to tell right away.

The accountants, predictably, recommended that they go with the cheaper coffee option. Numbers don’t lie etc, it was better to tick off 10% of their customers than 100% etc, cheaper coffee was the “obvious” thing to do etc etc.

Howard didn’t do that in the end. Instead, he raised the prices accordingly, and left a note in every store, telling people why his company was forced to regretfully raise their prices. And he also told them about the option he could’ve taken but chose not to i.e. cheapen the coffee.

And you know what? The customers understood his reasoning, and stood by the business.

Eventually wholesale coffee prices came down again, allowing Starbuck’s to lower their prices as well. The company weathered the storm and the brand ended up all the stronger for it. Life was good again.

[Bonus link from Cheryl:] “Live in the market, not in the spreadsheet”. Brilliant way of putting it.