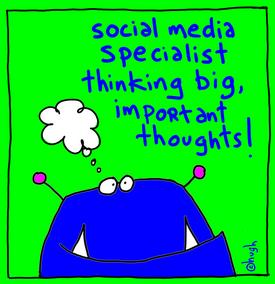 A Twitter comment from the London-based writer, Alain de Botton got me thinking. We can argue the numbers all day long, but they seem fairly ballpark to me, so let’s just assume for now that Alain is correct:

That same day I saw something related- this very sobering info-graphic on PSFK.com, about how many “units” a musician needs to sell per month in order to make a minimum, meager monthly wage of US $1,160.

Anywhere between 143 units [Self-Pressed CDs] to 4.5 million units [Spotify], depending on the media.

Selling four-point-five-million units seems to me like an awful lot of work [39 units per penny], just in order to make a lousy Grand…

None of this is rocket science. It’s just that people often forget, building up a massive audience via social media is very, very hard… not to mention, highly unlikely to happen.

Whereas building up a smallish-medium audience (say, 5-20 thousand) of committed, interesting people is fairly doable and straightforward, if you know what you’re doing.

Of that audience of 5-20 thousand, you can probably expect to turn between maybe one or two percent of them, maybe more, into paying customers annually. So we’re talking about an economic base of around fifty to maybe a couple of hundred customers per year.

Or if what you’re selling is pretty high-end, like my friend, James Governor’s Redmonk [software consultants] you can do well on far fewer bites than that; maybe three or four new clients a year.

Is the profit margin on the product you’re selling large enough to feed your family with such small numbers?

If the answer is “No”, you’ve got yourself a marketing problem.

Please bear in mind that “results may vary”. The numbers I gave aren’t written in stone; the important thing is to always remember that social media marketing is not mass media marketing, and for the most part, doesn’t behave like it. If you want to get successful in this game, unlike TV, you need to align your offering to a comparatively tiny, highly discerning, highly interactive audience.

It’s either that, or pray that one day your site becomes as large as Techcrunch, Huff Post or Boing Boing. Nice work if you can get it.