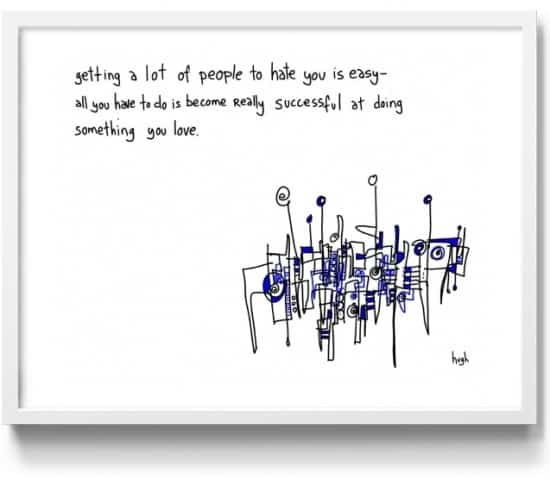 [“Popularity”, which I sent out in the newsletter recently. You can buy the print here etc.]

The bad news is, the better your EVIL PLAN, the more people are going to hate it.

The good news is, the better your EVIL PLAN, the more people are going to love it.

In Flaubert’s great literary masterpiece, “Madame Bovary”, the narrator describes Monsieur Bovary (the husband that the main heroine eventually cuckolds) with the most damning description I’ve ever read of a fictional character: “He offended no more than he pleased”.

In getting us to identify with Madame Bovary and dislike Monsieur Bovary, Flaubert was very clever. He made sure that Monsieur Flaubert wasn’t evil or a sociopath, he just made him a conventional, boring, inoffensive, COMPLETELY UNINSPIRING member of the middle classes, completely aligned and beholden to 19th-Century, respectable French society. And we couldn’t help but despise him for it. Because he wasn’t pure evil, because he was just as human as the rest of us, he had just made a conscious decision to emasculate his own humanity for the sake of social standing- something we’re all very capable of doing ourselves.

Walk into any supermarket and you’ll see again a similar phenomenon. Aisle after aisle full of products that most people, frankly, don’t really give two hoots about. Sure, they might be a perfectly good brand of paper towel or breakfast cereal, but at the end of the day, like Monsieur Bovary, they offend no more than they please. And so how much do people care? Answer: Diddly squat.

And go visit these products’ corporate headquarters and you’ll meet their human equivalent. Aisle after aisle of people in cubes. Sure, they’ll be perfectly nice, polite and all, they’ll be efficient and good at their jobs and all, but how many people would care if one of them lost their jobs tomorrow? Answer: Diddly squat.

But once your EVIL PLAN starts getting traction, you’ll start noticing a much more polarized world start to emerge. People who LOVE what you do, and people who UTTERLY DESPISE it.

Why such strong feelings? Why the emotions? You’re just doing your thing, they’re just doing their thing, so what’s the big deal?

Answer: Because A LOT of people AREN’T ACTUALLY doing their own own thing. They’re just trying to pay their bills, living paycheck-to-paycheck, payroll-to-payroll, promotion-to-promotion.

To some of these people, your example will give them hope. “I may just be shlepping now, but ONE DAY I’ll leave this cubicle farm AND THEN go do something amazing!” Those people will love you and buy into your EVIL PLAN. Hell, some of them will even give you money.

But some people will hate your EVIL PLAN too, for no real reason. Envy? Jealousy? Of course. Your example is not giving them hope, your example is just making them more aware of their own issues and inadequacies. And maybe it’s easier for them to attack you, than attack their own demons.

In Internet circles, we call these people “Trolls” or “Haters”. They’re easy to spot, mainly because they’re everywhere.

Sure, the haters are a pain, especially at first, when you’re not used to this kind of treatment.

But they do serve a purpose. If you were just shleppping along like they were, they wouldn’t bother going after you, their sights would be turned elsewhere.

Ergo, they’re a sign that you’re doing something right. So you probably want to get other people to hate you eventually i.e. the right kind of people. They might actually end up helping you define your brand to others, more than the people who actually love you.