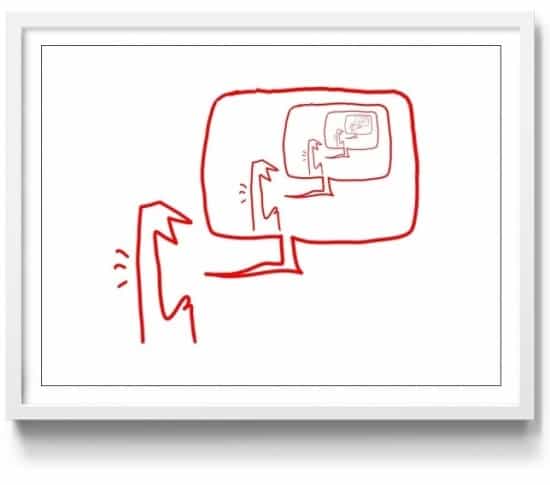 [“Echo Chamber”, which I sent out in the newsletter recently. You can buy the print here etc.]

You never know what you’re going to be famous for.

In the case of Polonius Lord Chamberlain to King Claudius in what is arguably the best known play in the world [Hamlet] it was some advice. His son Laertes is leaving Denmark, there being something rotten in the state of it, and is off to Paris. Polonius takes the opportunity to lay some fatherly wisdom on him and finishes up by saying:

“This above all: to thine own self be true.”

The expression lept out of the play and into the Big Book of English Aphorisms, becoming significantly more well known than Polonius himself.

As we grow up we learn by imitating, trying on aspects of other people. We dream of being stars of pop and film, helpfully forgetting that what makes them famous was who they are – and that ain’t us.

Kurt Cobain once said that “wanting to be someone else is a waste of the person you are” [and a person is a terrible thing to waste, as I’m sure he would tell you] but it’s an essential stage of development.

The important thing to realize is that, eventually, you need start being you.

And then – you need to get really good at it.

It’s been almost 15 years since Tom Peters wrote “The Brand Called You” for Fast Company and in that time the idea of “Personal Branding” has gone from the height of douchebaggery to an inevitable consideration for anyone in the mediation generation.

Once you begin to extend yourself via media, you become aware that by broadcasting your life through media fragments, you are creating an idea of who you are that is distinct from, but inextricably linked to, who you are.

And that brand is a highly defensible asset.

Not in the sense of making you a social media superhero [everyone is famous online, but some are more famous than others] but because no one else can ever use it.

If you are hired simply to do a job, whatever it is, your job is never entirely safe.

This is because, if you are being hired solely because you can perform the tasks associated with the role, then, by inference, you are always replaceable, by anyone else that can perform the same duties. Being able to the job is the cost of entry.

If you are hired because, as well as being able to perform the duties, you are remarkably good at being you, suddenly you are no longer quite so replaceable, because no one else can do that.

I get sent resumes a lot – sometimes several a day. I try to respond to all of them with at least some advice.

1. If you are looking to get a job anywhere in the marketing communications industry, but especially in digital places, make sure you have links to your web presences on your resume.

2. Don’t just put what jobs you have done or what experience you have – everyone has done jobs and has experience and it mostly all sounds the same: somehow communicate what makes you awesome at being you.

[Faris Yakob is the former (and first and only) Chief Technology Strategist at McCann Erickson (NY) and Digital Ninja at Naked Communications (Everywhere). He will probably be doing another job soon that he will be, hopefully, uniquely suited to. You can find him on his blogs: Talent Imitates, Genius Steals and StolenGenius.com – and on twitter @faris. He hopes you have a truly awesome day.]

[When companies get too successful to fast, this often happens…] Does this ever happen to you? A person that you’ve known forever, maybe since you …

[“Nightmare”, which I sent out in the newsletter recently. You can buy the print here etc.] [Today’s guest blog post comes from Pat Kane.] “No …