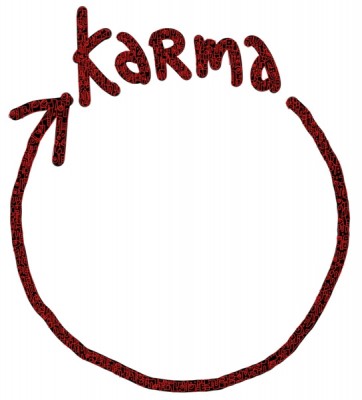 KarmaMedia is a communications shop in Hungary. As it was first explained to me:

Karmamedia is a communication shop with an emphasis on P.R.  (whatever that is), and on doing things online (wherever that is).
We started out as a blog three years ago, working at various big agencies, and jumped ship to become independent and happy about six months ago.

Our name was selected intuitively because it sounded good and because the guy who started it all wanted to use a picture of Buddha sitting with a notebook – but since then we found a fitting explanation for it: online, what goes around comes around. We don’t believe in karma in the religious sense but we do know it exists online – Google makes sure of this. So we try to help companies do good and meaningful things and make sure these things get noticed.

To celebrate their six-month anniversary, they threw a big party. The local trade press gave it nice coverage. They commissioned me to draw something for the event. I think the motif of “Karma” pointing to itself, a play on the Eastern symbol of the eternal snake eating itself, worked out well. Straight and to the point.

Thanks to Balazs Lovenberg and his colleagues for such a great assignment. I had a lot of fun. Rock on.