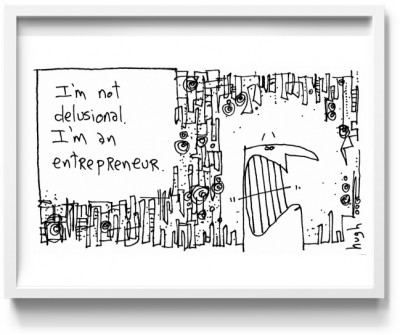 [The “I’m Not Delusional” print, for sale on the gallery…]

Random thoughts on being an entrepreneur. [Originally posted January, 2007]

I wouldn’t say I was an authority on entrepreneurship, certainly not in the same league as people like Fred Wilson or Jason Calacanis. That being said, the last couple of years haven’t been too shabby, either. With that in mind, here are a few thoughts I have on the subject, in no particular order. The list, by the way, is far from complete- I’ll probably be adding to it sooner than later etc.

1. Everything takes three times longer than it should. Especially the money part.
2. The best way to get approval is not to need it.
3. People want what they can’t have. In fact, that’s pretty much all they do want.
4. Once you become an entrepreneur, you find the company of non-entrepreneurs a lot harder to be around. You’ve seen things they haven’t; the wavelengths alter, it’s that simple.
5. In a world of over-supply and commodification, you are no longer paid to supply. You’re being paid to deliver something else. What that is exactly, is not always obvious.
6. Word of mouth is the best advertising medium of all. The best word of mouth comes from disrupting markets.
7. People buy your product because it helps fill in the narrative gaps in their lives.
8. You can either be cheapest or the best. I know which one I prefer.
9. Some people think that once they secure venture funding, their problems will be over. Wrong. That’s when your problems REALLY begin.
10. It’s better to be underfunded than overfunded.
11. If an average guy in a bar can understand what you do for a living, chances are you’re halfway to becoming a commodity.
12. It’s easier to turn an ally into a customer than vice versa.
13. If you’re happy in your career before the age of thirty, you’re probably doing something wrong. Heck, if you’re happy in your career before the age of seventy, you’re probably doing something wrong.
14. Smart, young, artistic people are always asking me which is a better career path, “Creativity” or “Money”. I always answer that it doesn’t matter. What matters is “Effective” and/or “Ineffective”.
15. Write the following on a piece of paper, have it framed, and stick it on your office wall: “Have you hugged your customer today?”
16. People will always, always be in the market for a story that resonates with them. Your product will either have this quality or it won’t. If your product fails this test, quit your job and go find something else. Just making the product incrementally cheaper or better won’t help you.
17. Products are idea amplifiers. The molecules and/or bytes are secondary.
18. People remember the quality long after they’ve forgotten the price. Unless you try to rip them off.
19. Markets serve entrepreneurs better if the latter can keep the former undersupplied. Oversupply is the kiss of death.
20. I personally know a former CEO who, once he attained control of the company, ran an EXTREMELY profitable business into the ground in less than two years. From a market cap of $100 million to ZERO, just like that. Why? Short answer: He loved being “The” CEO, but he didn’t much care for being “a” CEO.
21. In terms of becoming an entrepreneur, probably the most useful thing I learned in the last twenty years was how to enjoy my own company for long stretches of time.
22. One successful entrepreneur I know well has a wonderful quality, namely that he never, ever compares himself to other people. He just does his own thing, which actually serves him rather well. Just because his competitor has bought himself a bigger motor boat, doesn’t mean he feels the need have a bigger motor boat. This quality helps him to build his business the way he sees fit, not the way the motor boat people see fit.
23. Running a startup is full of extreme ups and downs. Which is why so many successful and happy entrepreneurs I know lead such normal, stable, unglamorous, “boring”, family-centered lives. Somehow they need the latter in order to balance out the former. Extra-curricular drama looks great in the tabloids, but that’s all it’s ultimately good for.
24. MBAs are conditioned to use their brains in much the same way as sex workers are conditioned to use their genitals. Nice work if you can get it.
25. Bill Gates may have a million times more money than me, but he isn’t going to live a million times longer than me, watch a million times more sunsets than me, make love to a million times more women than me, drink a million times more fine wines than me, listen to a million times more Beethoven String Quartets than me, nor sire a million times more children than me. Human beings don’t scale.
26. F. Scott Fitzgerald once wrote, “There are no second acts in American lives.” F. Scott was a drunkard and a fool.