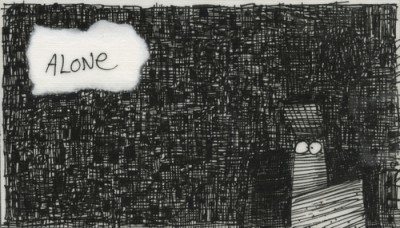 Another one from my New York days, circa 1999. It captures well the feeling you get when you’re still new in town- surrounded by a sea of people, yet nobody really knows you.

I wrote the “Alone” bit is on a separate bit of card, tore around it, stuck it on the main card, then I laminated the two pieces together in clear plastic.

I laminated the very early ones- maybe a hundred or so of them. They’ll be worth a lot of money once I’m dead. Heh.