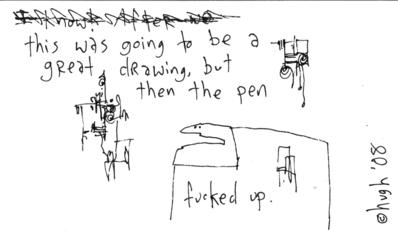 i. The Book. Sometime on Sunday I finished the first draft of “EVIL PLANS”. Sent it off to the publisher yesterday. Now begins the editing and the production. It hits the bookshops January 2011.

About mid-December I had this big ol’ panic attack; thinking I’d better get to work on EVIL PLANS or else I’d miss the deadline I’d set for myself. So I buried myself in the office and pulled my hair out for a couple of weeks. All this while the Holiday Season was kicking in- more hair pulling there as well, but that’s a story for another day etc.

Ok, so the deadline was met in good time, but I’m a nervous wreck now…

ii. The Newsletter, Phase Two. From the Sign-Up page:

“From early January, 2010, I’m star­ting a news­let­ter for you guys. The plan is to e-mail y’all a new, free car­toon every mor­ning at 6am, New York Time. I may include other stuff along with them– writ­ten obser­va­tions, tips, use­ful links etc– but regard­less, I’m hoping it’ll be something that starts your day off with a chuckle.”

iii. Ummmm… Did I mention that I’m a nervous wreck now…?