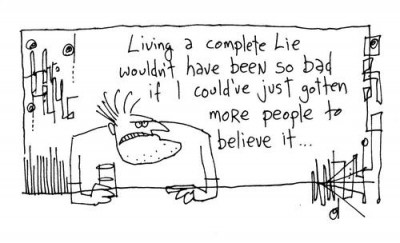 Have a story. And make sure it’s a good one. A DAMN good one.

I have a very old, dear friend in New York, call him Andrew.

Andrew is about forty, and a pretty suc­cess­ful film director. One of his films aired on HBO recently. He also has a thri­ving cor­po­rate explainer video busi­ness, which he works on when busi­ness in Holly­wood is going slow that month. He’s not famous, but he’s done very well.

When I first met him he was in his late twen­ties, wor­king as a bar­ten­der. Back then he had a vague idea of get­ting into the film busi­ness some day, but I didn’t know how serious he was, to be honest. A lot of twenty-somethings in New York blether on about get­ting into film, one tends to mostly ignore it.

But how he eventually broke into the film busi­ness is one of my favo­rite tales.

In the very late 1990s he finally deci­des that he’s serious about breaking into the industry. So he goes out and buys him­self a small video camera, a sound recor­der, a new Macintosh computer to do his editing, a few lights, some mic­ropho­nes, that kind of thing.

So the good news is, he now has all the gear he needs to get started.

The bad news is, having spent all his savings to acquire the gear, sud­denly he needs money in a hurry. New York is expen­sive, and he’s broke.

But because he had pretty much zero expe­rience in the film busi­ness at that point, he soon rea­li­zes that it’ll be a while before anyone in the tra­di­tio­nal New York film industry will hire him for the kind of money he’s loo­king for.

He can’t afford to wait that long. So how does he pay the rent?

Let’s say you and your Sig­ni­fi­cant Other want to create, shall we say, a spe­cial memento [*cough*] of your love [*cough*], and want something a bit more upmarket [*cough*] than just the nor­mal, ama­teur, single-angle, une­di­ted video from a camera [*cough*] that’s standing on a tri­pod near to the bed.

That’s right. You’d give Andrew a call. And Andrew and his sound man would come over to your apart­ment and shoot you and your sig­ni­fi­cant other [*cough*] going at it. With pro­per edits, ligh­ting, sound and camera angles. You and your loved one in the full throes of pas­sion [*cough], with Andrew and his sound man hove­ring around you in silence, get­ting the per­fect shot.

After he had shot the video, he would then take out his com­pu­ter and edit the job right then and there, on the kitchen table. So before he left your home, he’d have already given you the SINGLE and ONLY copy that exis­ted of the video. He and his sound man would then exit with nothing i.e. with no bac­kup copy on his com­pu­ter, so there was no chance of the foo­tage ending up on the inter­net. At least, not from Andrew’s side.

He char­ged a few hun­dred bucks for his ser­vi­ces. The average shoot only took an hour or two. He’s often do two or three shoots a day. Damn good money for an ex-bartender. A lot more money than I ever made in New York.

Busi­ness was brisk from Day One, to say the least. When he first told me what he’d been up to, back around 2000, I liked the story so much I pitched the idea to a jour­na­list friend of mine. Andrew ended up being featured in a pretty high-end maga­zine soon after, which raised his profile even more. Within no time the phone was ringing off the hook, with all sorts of interesting people, both inside and outside the film industry, wanting to do business with him.

Great story. There’s only one catch:

“I made the whole thing up.”

“What?” I say. “My favo­rite story about you ever, the one I’ve been telling folks with glee for the last ten years, was a total lie???”

“You knew that about me already,” he says.

“Look,” he says, “Back then I was just one of thou­sands of young wan­nabe film knuc­kleheads in New York, trying to get my foot in the door. I nee­ded to have a story to tell peo­ple. One that was inte­res­ting. One that was dif­fe­rent. One that got people’s atten­tion. One that made me stand out from all the other knuc­kleheads. One that didn’t require me having a mas­sive show­reel. Hey, it wor­ked. That story got me my first few edi­ting jobs in the busi­ness. And since then I’ve been nothing but successful.”

He pau­ses for a second.

“A little present-tense suc­cess, for­gi­ves a lot of past-tense failure,” he says, chuc­kling with delight.