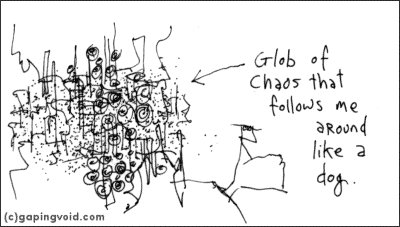 “DON’T WORRY IF YOU DON’T KNOW ‘ABSOLUTELY EVERYTHING’ BEFORE STARTING OUT.”

A lot of people massively postpone their EVIL PLANS, for the simple reason that they don’t have an answer for every possible contingency.

So instead of getting on with it, they spend the next few years keeping their Nowheresville day job, whilst spending their evenings surfing the web, scouring the trade magazines, researching everything like crazy, trying to get a thorough, small-time Outsider’s view about what the big-time Insiders are currently up to.

And then they often compound this by also trying to get a handle on the even bigger stuff. What will happen to the American/Asian/European/Brazilian/Whatever economy in the next 2/5/10/25/Whatever years, and how will these BIG things affect their tiny, obscure niche.

Agreed, a wee bit of prudence and informed circumspection are lovely virtues to have, but overdoing it can be ultimately unproductive, for a variety of reasons. Here are my four favorite ones:

i. Being an Outsider with too much Insider Knowledge, makes it even more likely that you’ll make the same mistakes as everybody else.

When Google- the most successful advertising business in the history of the world- started their company, their founders knew practically nothing about the inside workings of Madison Avenue. Sergey Brin and Larry Page most likely had zero inside knowledge about famous advertising titans like Leo Burnett, David Ogilvy, Lee Clowes, John Hegarty or Claude Hopkins. They were just a couple of twenty-something Stanford PhD students, who were far more interested in Internet search engines than they ever were in Nielsen Ratings, Proctor & Gamble or The Clio Awards. Which helps explain why, when the normal, mainstream, industry-obsessed kids of around the same age were just landing their first East Coast internships or junior executive positions at advertising blue-chips like McCann’s, Lintas, DDB or Saatchi’s, Sergey and Larry were already well on their way to becoming billionaires.

When I started my fine-art print business in late 2008, I didn’t wait for the acclaim of the big-city gallery scene, or a favorable review from the New York Times art critics before I took the plunge. [A] Those elite votes of approval were VERY unlikely to happen anyway, and [B] Even if did happen, it would have taken years and years. I just reckoned instead that [A] my blog readers already knew and liked my work, [B] a lot of them had disposable incomes and [C] a lot of them had a lot of wall space that needed filling. That was all the incentive I needed to get the ball rolling.

So I just put the idea out there on my blog to see if any fish would bite. And they did. A lot of them even liked the idea enough to put up money in advance, before I had spent a single penny. As a result, the business has been profitable since Day One, without me having to gain an encyclopedic knowledge of the big New York, London and Shanghai art galleries, the current career trajectories of all the artists they represent, or the recent auction prices at Sotheby’s and Christie’s. Too much of that stuff would’ve just slowed me down, big time.

[Other, Far Better Examples Than My Own:] Before they launched their car companies, Henry Ford and Karl Benz didn’t decide to first spend a decade trying to win the approval of prominent horse breeders or railway magnates. Same goes for the Wright Brothers.

I love this story about Bill Gates: Some years ago, when the company he founded, Microsoft was at the height of its powers, he was giving a lecture to some college students. When the the Question & Answers came along, a keen undergraduate asked the question, “What advice would you give to a young person like me who wants to make a lot of money some day?”

Gates’ answer was as wonderful as it was short: “For Goodness’ sake, don’t do what I did. That money’s already been made by me.”

ii.”Events, Dear Boy, Events.” -Harold Macmillan, British Prime Minister 1957-1963, after being asked by a young journalist, what is the most likely single factor to blow any government off-course.

If it’s pretty much impossible for the smartest people in Washington, Wall Street and Silicon Valley to predict what the big, bad world is going to do next, what chance does a guy wanting to open a small, highly-specialized, hand-built EVIL PLAN bicycle operation have, from his small storefront in Brooklyn?

Trying to micromanage the Macro, from the comfort of your wee bike shop… Seriously, your time is better spent trying to manage what you CAN control. Like being nice to customers, keeping your word, staying cheerful, positive and focused, completing a task cheaper, faster and better than you had originally promised, working harder and smarter than the next guy, fighting hard to keep your ideas fresh i.e. all those good, small moves that Grandma told you about decades ago.

To get some very lucid, hardcore perspective on this, I recommend that you read Nassim Taleb’s excellent and highly readable “Fooled By Randomness” (W. W. Norton & Co., 2001). Nassim’s thesis is childishly simple: That the bigger the historical event, the more random and unpredictable the event was to begin with. Nobody saw 9/11, Pearl Harbor, the assassinations of JFK, Lincoln or Archduke Franz Ferdinand (and the subsequent outbreak of a four-year World War), the Atomic Bombs being dropped on Japan, the 1923 collapse of the German Deutchmark, the Barbarians sacking Rome in 410 A.D., The Bubonic Plague of the 1300’s, or Hitler’s 1941 invasion of the Soviet Union coming down the pike. Ditto with Detroit not seeing the threat of Japanese cars coming after 1945, or IBM not seeing the  threat posed in the 1970s by Microsoft and Apple. Everything just happened when it did, everybody was shocked completely, and everybody just had to deal with the MASSIVE AND UNPREDICTABLE consequences afterward. Not too much fun at the time, but there was no other choice. Nassim makes a damn good case.

So if your EVIL PLAN is to open up a two-person internet software company, or a mom n’ pop fancy cheese shop in North Chicago, there’s little point in first waiting to see if, sometime in the next two decades, whether or not India and Pakistan decide to launch nuclear missiles against each other.

Yes, Louis Pasteur did say, “Fortune favors the prepared mind.” On one level, he was right. That being said, the stuff you learn beforehand will never be one-tenth as useful as the stuff you learn the hard way, on the job. All the former can do is help train you to deal with the reality of the latter. The real truth is always found in the moment, never in the future. Sadly, not everybody is cut out for thriving in the present tense. Life is unfair.

I’ve been in a few businesses in my time: advertising, marketing, fine art prints, greeting cards, phone sales, animation, magazines, wine, corporate consulting, English tailoring, and now, book writing. Take it from me- if I had known ONE HALF about these businesses that I know now, I doubt I would’ve bothered in the first place. Instead, I would’ve just gotten an MBA or law degree somewhere and landed a mid-level position in a bank, law firm, corporation or whatever. Maybe joined the local country club while I was at it. Lucky Me.

[About Hugh. Car­toon Archive. Sign up for my “Daily Car­toon” News­let­ter.]