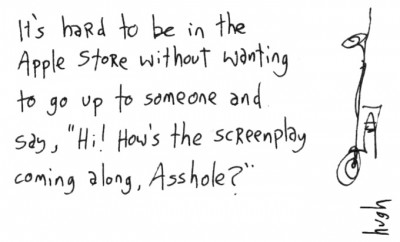 Hugh, this is one of your best in a while. No tech bulls**t, no circle-jerk 2.0, just an unadulterated reference point for just about any consumer out there. Brilliant man!

You would be wrong in the case of my neighbor. He’s 27, came to NYC from Detroit to make his mark and he did.

This would be his second script, the first being “Brunch, The Musical” which did rather well off B”way for a first attempt.

Since you seem to have a talent for selling art, why don’t you sell my pictures? I work the streets, selling isn’t my thing

There’s also 10,000 from Japan, from the 4 times I went there, once as a celebrity with a museum show.

Nice. I think it works both ways. Apple’s attractive both to the wannabe artist, as well as a completely plain non creative person. For the latter too an Apple is a statement of meek rebellion.

Yeah, I hate people who use computers and/or try their hands at creative endeavors too. What jerks.

Shit, this is too funny – it is exactly how I felt after listening to yet another frustrated creative mind working at Apple store. Quit! Follow your dream whatever it might be!

Great! Not sure if you’re referring to the customers or the “geniuses” they’ve got working there.

This is the same way I feel about Starbucks

This is one of my favorites.

One of the things I enjoy about website blogs is that they trigger an idea in my brain. When that happens, I feel like I need to provide feedback with the hope it is helpful to other people. Simply because there are lots of personal blogs with unique points of view, they question your understanding. It is at these moments when you have significant insignt others may not have had, including the blogger him/herself. I find myself returning to your site because you have lots of very good insights and also you are actually at this a long time, and that is very exciting and tells me you know a lot. Keep triggering imagination in other people!

Do you own one?

Sorry for the large recall, but I’m rattling tender the new Zune, and this, as source as the reviews several added group hold longhand, will provide you determine if it’s the manus prime for you.

Thanks for the article, can you make it so I get an update sent in an email when there is a fresh post?