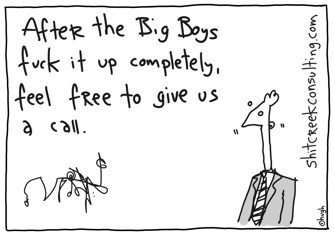 The groovy cats over at Shit Creek Consulting commissioned me to design them their own “Cube Gre­na­de”. After looking at the half-dozen or so ideas I presented to them, they chose the one above. I believe they’re looking to use it for their business cards, for example.

Shit Creek are a Microsoft Gold Partner. It seems a big part of their business is coming in and cleaning up the mess left behind by the large tech consultancies [I’m not naming any names]. So that’s the idea I ran with.

The name of their company implies they have a lot of attitude. They wanted a cartoon that conveyed this. Easy. It was a fantastic commission and I’m very happy with the cartoon they chose.

I’m looking to take on more of these kinds of commission. Feel free to e-mail me if you think you could use my work, Thanks.

This is one of the pieces we did recently for the Miami Beach Mayor’s Office. Though Miami Beach is mostly known as a tourist town …

Dave shows off his latest Rackspace swag, a black snuggie blanket and my latest “Love Matters” t-shirt that we recently made for them. I …