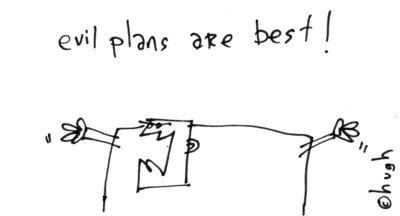 The rumors are true. I’ve landed a second book deal. You can go see the details here. Same publisher and editorial team as my first book, IGNORE EVERYBODY. The title of the second book will be called, you guessed it, “EVIL PLANS”.

EVIL PLANS had an interesting genesis. I was just tooling around with some ideas on the blog, which all ended up being collectively piled onto the EVIL PLANS page, just like what happened with the original web version of IGNORE EVERYBODY. Somebody at my publisher’s saw the blog page, got really excited by it, printed it out, and went to show everybody else on the Editorial team. Next thing you know, my agent gets a phone call from them.

Up until that point, I hadn’t submitted any book ideas to anyone- not even my agent- mainly because I didn’t really think I had any to submit. This was only a month or so after IGNORE EVERYBODY had come out in June 2009, and I was planning on giving myself at least another six to twelve months before giving another book idea much thought. Events proved otherwise.

I remember when IGNORE EVERYBODY was just taking shape as a book idea, and me thinking, “Wow, I think I can do this.” It was an exciting feeling. I’m glad it still feels that way.

Thanks to Adrian, Jillian, Will and Maureen over at Penguin/Portfolio for giving me a crack at it. Thanks to my agent, Lisa, for negotiating the deal on my behalf. Rock on.