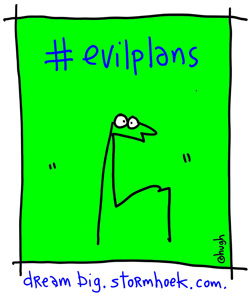 [Click on image to enlarge/download etc. Feel free to use badge for your own needs etc.]
[Follow my #evilplans on Twitter….]
Three years ago, Stormhoek, the South African wine I’ve been associated with for the last four years, sponsored some geek dinners. They were a huge success.
We’re ready to get back at it, as part of my EVIL PLANS etc.
This time, however, we’re going to sponsor Tweetups. If you’re one of the people following me on Twitter, are based in TEXAS and are planning on having a Tweetup in the next wee while, drop me an e-mail, and let’s see if we can’t get some wine sent there for the evening.
Even better, if you have one near to where I’m heading on my Evil Pans road trip, I’ll try to attend. Rock on.
LESS IS MORE: One of the points I’m trying to make with this exercise in futility is that yes, you can do interesting stuff on a tiny, tiny scale and still make a big impact. So the smaller the event, the better. I’d rather attend a dozen tweetups with five to ten people, than one tweetup with a hundred people. I’d rather attend a tweetup in somebody’s back yard, than a tweetup in a fancy, big-city restaurant.
Sure, a fancy, big event every now and then is fun, but that’s not the main point of this…

[For those of you outside the loop, a “Tweetup” is a spontaneous, self-organizing social gathering of fellow Twitter users, usually organized on Twitter itself. Usually food and drink are part of the equation etc.]